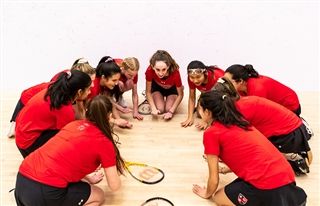 2/21/2019
Basketball
*Please note a correction on two past scores for the JV Girls' Basketball team that were misprinted. The team won against Kent on Feb. 9 with a score of 53-18. The team was also victorious against Hopkins on Jan. 12 with a score of 30-28.

The JV Girls' Basketball team won against Suffield on Feb. 20 with a score of 40-14. Led by Emma Henry '21 with 11 points, Keegan McMahon '21 with eight points, and Catherine Daniels '21 and Juanita Asapokai '20 with six points each, seven different players scored for the Wyverns in this total team victory. Never trailing in this game, the Wyverns worked hard for a 19-4 halftime lead and went on to outscore Suffield 21-10 in the second half due to solid half-court defense and opportunistic transition baskets. The final game and final home game for the season will be this Saturday vs. Canterbury.

The JV Boys’ Basketball team lost 56-73 against Canterbury on Feb. 20. KO had a four-point lead at halftime, however, in the second half the Wyverns ran into a hot-shooting Canterbury team. Christian Pedro ’22 and Sam Capodice ’20 led the scoring with 14 and 10, respectively. Jacob Schwartz ’21, Dylan Swift ’21 and Jeff Davis ’21 contributed with eight and seven points apiece. All the KO players played hard and gave a great effort throughout the game.

The MS Girls’ B Basketball team won 18-10 against Renbrook in their final game of the season. It was a great game to finish the season on, as everyone showed how much they improved in skill and knowledge of the game. The man-to-man defense was tough, and they played as a team. Madi Oh ‘23 and Olivia Dufresne- Achatz's ‘23 were solid and steady on the floor in the last game of their middle school career; their heart and leadership will be missed next year. Even though Margaret Miller ‘25 had multiple injuries during the game due to her scrappy defense and crashing the boards, she was our leading scorer at four points, hitting two beautiful outside jump shots. Addisen Nicholson ‘25 added two points to the score with the first basket of her KO career. Many other players added a basket to the score while others played excellent defense. Coach Nicholson said, “I am proud of my team for playing together, supporting each other, learning more about the game, and making it a fun season! Thank you to my players and parents.”

The MS Girls’ A Basketball team played in a tournament at the Master’s School on Feb. 14, winning the tournament in fine fashion 38-11 against MacDuffie and 48-14 against Master’s. The team played its best version of basketball against both opponents, winning both games by solid margins. In game one against MacDuffie, the Wyverns jumped out to an early lead, with a halftime score of 28-9. In the second half, the team took its foot off the gas pedal and won by a final of 38-11. Jordan DiMauro ’23 led the team with 12 points, all of which came in the first half. Nearly every player on the team got on the board in this game, with Emily Knowles ’25 finishing with nine points and Georgia Louis ’24 scoring six. In the final game against Master’s, KO came out with the same hustle and quickness that has characterized the entire season. Against a tough opponent, KO started the game on a 20-0 run, smothering Master’s on defense and running the fast break effectively. Leading 29-2 at halftime, the Wyverns won this game 48-14. With 10 points on offense, Emily Knowles ’25 was also a star on defense by keeping Master’s scorers at bay. Kyra Dunnirvine ’23 continued her trend of playing solid defense, and also scored 11 points. Jordan DiMauro ’23 was the high-scorer once again, finishing with 14. Quinn Kearney ’23 and Alex Arnold ’23 were key on the boards, fighting for every rebound and starting the transition to offense with great outlet passes. This tournament highlighted all of KO’s strengths. Smart basketball and an aggressive attitude propelled KO to both victories, and everyone contributed in one way or another. Each player also showed great heart, making it clear why the team has found so much success this season.

The MS Girls’ A Basketball team won 51-10 against Wilbraham & Monson on Feb. 16 in the last game of the season. Before the game, the team honored its six Form 2 players, Hallie Braunstein ‘23, Jordan DiMauro ‘23, Kyra Dunnirvine ‘23, Allegra Kotowitz ‘23, Quinn Kearney ‘23, and Alex Arnold ‘23. These six players were true role models, and much of the team’s success is owed to their heart, hustle and positive attitude. This game was no different, as KO played some of its best basketball to end the season. Despite some sloppiness to start the game, the Wyverns got back into their groove, scoring 32 points in the first half. They also clamped down on defense, allowing only two points and zero field goals in the second half. Emily Knowles ’25 scored an impressive 19 points, followed by Jordan DiMauro ’23 who scored 10. Form 2 players Kyra Dunnirvine ’23 (four points), Allegra Kotowitz ’23 (four points) and Quinn Kearney ’23 (two points) also got on the board. Alex Arnold ’23 had a great game rebounding against a taller opponent, and Hallie Braunstein ’23 played smart defense that made it tough for Wilbraham to move the ball. With this game, KO finished the season in the same way that it has played all year. Everyone can look back on the season with pride at all of their success, as each player contributed in some way to the team’s 9-1 record.

The JV Boys’ Basketball team won 76-44 against Hopkins on Feb. 16. KO played a great game at home versus Hopkins. KO jumped out to an 18-0 lead and never looked back. KO’s three quarter court pressure led to numerous Hopkins turnovers. KO was able to use the Hopkins's turnovers and score in transition. All KO teammates contributed to the big win. The scoring was led by Jack Risley ’20 and Nate Capodice ’21 with 14 and 10 points. Chris Sienko ’21, Christian Pedro ’22, Wes Pierce ’20, Dylan Swift ’22, Sam Capodice ’20 and Jeff Davis ’21 contributed to scoring with nine, eight, seven, six and five apiece. Jacob Schwartz ’21, Pierce, Davis and Jack Kinney ’21 grabbed numerous rebounds for the Wyverns. The Wyverns knocked down eight three-pointers in the game.

Hockey
The Varsity Boys’ Ice Hockey team lost 3-6 against the Harvey school on Feb. 13. Despite falling behind early 2-0, KO game out of the locker room in the second period determined. Sean Gilland ‘22 opened the scoring for KO from the left circle where his shot found the back to the net. Despite the strong push by KO, they trailed Harvey 4-1 at the end of the second period. Undeterred, KO came out in the third and would score twice more on goals from Will Berckemeyer ‘22 (assist Mitch Autorino ‘21) and Keifer Jaffee ‘20 (assist Garth Swanson ‘19 & Karstian Lang ‘20) to pull to within one. The Cavalier attach would add two more goals to give Harvey the win, 6-3.

Swimming & Diving
The Varsity Boys’ Swimming & Diving team lost 87-93 against Kent on Feb. 13. In the last dual meet of the season, the Wyverns put up a strong fight against the Lions. There were many solid swims throughout the day. Walter Kraus ‘21 had a great swim in the 200 yard Free. In the 50 yard Free, Ellis Winfree ‘19 and Zeno Chen ‘22 both had a solid swim. Eli Brandt ‘23 once again broke the school record in the 1 Meter diving with a score of 239.45 and Kevin Graziosi ’22 also had a great day on the diving board. In the 500 yard Free, Felix Fei ‘21 swam a great race coming in third in a time of 5:39.80. In a close race, Ben Zamstein ‘20 came in fourth in the 100 Back in a time of 1:05.91. To close off the meet, the KO boys came in second and third in the 400 Free Relay. There were many great swims by Marrich Somridhivej ‘22, Kraus, Marwynn Somridhivej ‘20, and Fei in the final relay. The Wyverns are now preparing for Founders Championships next weekend!

Squash
The Varsity Girls’ Squash team won 7-0 against Greens Farms Academy on Feb. 13. After a heartfelt Senior Day celebration, the Wyverns were ready to get down to business. The team as a whole had a strong, definitive win, with only a few games lost here or there. Senior co-captains Ananya Alleyne '19 and Cami Berckemeyer '19 each lost only five points total in their matches in the number two and three spots, respectively. Senior Claudia Petrie '19 finished her last home match with a turnaround of a difficult first game, moving on to win three straight games and take the match. Izzy Berckemeyer '21, Amelia Levine '20, and Sloan Duvall '21 all took their matches in three games to solidify the team win.

The Varsity Girls’ Squash team lost 1-6 against Hopkins on Feb. 14. In what the team expected to be a difficult match, all of our players played up a spot on the ladder and really brought it to Hopkins's strong lineup. Ananya Alleyne '19 moved up to the number one spot, but showed no nerves in the face of this challenge, winning her match in five games with the effective use of cross-court drives. Izzy Berckemeyer '21 had a hard-fought five-game match in the number three spot, relentlessly going for every point until the match was over. Ely Alleyne '23 used strong serving and straight backhand drives to take her opponent to four games in the number seven spot.
Back