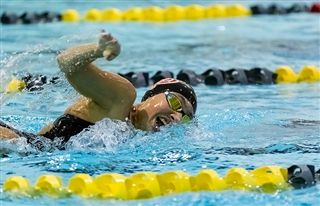 12/5/2019
Basketball
The Varsity Boys' Basketball team participated in a thrilling game against perennial double A powerhouse, St. Andrews School on Dec. 4 and lost 66-82. The Wyverns played the defending New England champions even throughout the first half and took brief leads in the second half. The team played with great confidence, selflessness, and toughness. In the end, St. Andrew's depth and talent proved too much as they pulled away in the last few minutes of the game. It was a wonderful effort by our team and a fantastic start to our season. The Wyverns were led in scoring by Gavin Griffiths '23 (31 points) and Carter Meshanic '21 (20 points).

Swimming & Diving
After an extended time away from the pool due to Thanksgiving Break and some unexpected snow days, the Varsity Girls' Swimming & Diving team put together quite an impressive showing for their first dual meet of the 2019-2020 season. The young KO girls' team earned 71 points against 89 for the Hopkins School. Numerous girls posted near best times, indicating exciting results to come this winter season. The A Medley Relay of Allie Wildstein ‘22, Lily Liu ‘22, Stella Risinger ‘22 and Maggie Dwyer ‘23 earned third place. In the 200 Free, Risha Ranjan ‘21 and Dwyer earned second and fourth respectively, while Wildstein and Risinger earned third and fourth in the 200 IM. Cai Kuivila ‘20 flew off the blocks to second place and best time of 28.68 in the 50 Free, closely followed by Serafina Squatrito ‘22 and Lily Liu ‘22. Risinger followed up a near best time in the 200 IM with another near best time and a second-place finish in the 100 Fly. Finally, in the most exciting race of the meet, Risha Ranjan ‘22 and Hannah Krause ‘23 earned first and third place in the 500 Free, both just touching out the competition on either end of the pool.
Back