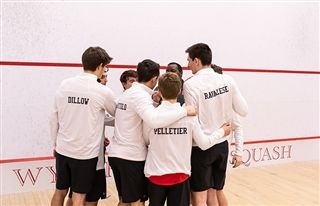 2/27/2020
Basketball
The Varsity Girls’ Basketball team won 55-41 against Westminster on February 20. It is hard to beat a team three times, but it was easy for the Wyverns who won for the third time this season against Westminster. KO knew that they had to come out strong and aggressive and relied on their defense to capture the win. Throughout the game, the girls were aggressive with trapping and getting deflections which cause open shots for KO. On the offensive end, it was a great team effort with ball movement and shots were falling for the Wyverns. Angelina Maselli '20 was on a shooting streak, making eight threes and ending the game with 24 points. Also, Natalia Correa '22 contributed nine points and was able to handle the tough man to man pressure. Jordan Dimauro '23 and Molly Jones '20 each had six points and then Megan Murphy '22 and Emily Knowles '25 added five points each.

The Varsity Boys' Basketball team lost 82-53 to an outstanding Canterbury team on February 26. Gavin Griffiths '23 led the Wyverns with 31 points. KO battled hard but the top-ranked Canterbury team was too much in all facets of the game.

The JV Girls' Basketball team lost 31-34 against Suffield Academy on February 26. Down by five at halftime, KO came back in the third quarter to tie the game at 25. Leading the comeback was Emma Henry '21 with 15 points for the game, and Hailey Williams '23 with seven points, including a buzzer-beater at the end of the third quarter. Keegan McMahon '21 contributed a significant defensive effort, guarding the Tigers' best player and limiting her to six points in the second half, only three of those points coming from the floor.

The Middle School Girls A Basketball team won 33-7 against Wilbraham & Monson on January 29. Although it took some time for KO to settle down into the game, once they did there was no turning back. Up 21-4 at halftime, the Wyverns were able to control the entire game. Jillian Alexander ’24 had her best game of the season, posting a double-double with 12 points and 10 rebounds. She was also great on the fast-break and allowed KO to determine the pace of the game. Lia Arnold ’25 nearly got a double-double, scoring nine points and finishing with an impressive 13 rebounds. Beyond these great performances, the team shared the wealth evenly, with everyone getting productive minutes on the floor. With smart ball movement and floor spacing, each player got some good shots off and almost everyone scored. This was a great team win, and with only one game to go, it is clear that they are playing well together.

The Middle School Girls A Basketball team lost 27-43 against Hamden Hall on February 26. In their last game of the season, KO fought hard to stay in the game. Trailing 18-2 after the first quarter, the Wyverns were still able to outscore Hamden Hall in the second half. This was not easy, as Hamden Hall played very aggressive defense and made a high percentage of their shots. However, KO never gave in, and the team fought to the very end. Jillian Alexander ’24 led KO with nine points, followed by Ashley Buckingham ’24 who scored seven. Each Form 2 player scored, and the team also benefited from the tough defense of Kelly Stepnowski ’24 and leadership of Georgia Louis ’24. Even though the Wyverns ended up losing, they left with their heads held high. They can also be proud of the way they played all season, making it a fun and competitive run. The team can thank its Form 2 players for the tremendous examples they set, and for being positive role models. We wish them well in their next endeavors and look forward to another great season next year.

The Middle School Girls’ B Basketball team won 17-4 against Renbrook in the final game of the season. With almost the entire B Basketball squad present, with oodles of parents cheering us on, and with loudspeakers booming to introduce and celebrate our Form 2 students, our only home game of the season started off in the Field House in Husky style. Hana Haxhaj ‘24 and Ava Leshem ‘24 led our team with spirit and energy to a dominating win in their last basketball game as Middle School players. Renbrook's offense was no match for our intense man-to-man defense and strong rebounds in the paint. We ran the floor on offense, passing and driving with ease. Our team came together to truly play like a team, trusting each other and their hard work from practice throughout the season. The coach was very proud to see a few members of the team debut their skills on the court for the first time this year. Azul Montiel ‘25 and Emma St. Clair ‘25 played incredibly well in their first true game ever. Julia Sohn ‘25 and Alyssa Tousignant ‘25 continued their grit, fast hands and quick feet to complete many steals from our opponent. Jenna Kannan ‘25 and Addisen Nicholson ‘25 defended Renbrook's strongest ball-handler and successfully shut down her drives to the baskets and their offense. Margaret Miller ‘25 made her first three-point shot in a game, something she has been working on all season. Meredith Decker ‘25 put in every ounce of effort, taking many shots and grabbing many rebounds that energized our team. Sofia Garza ‘26, the leading scorer of the game, steadily added points with her controlled rebounds and lay-ups under the basket. Coaches Nicholson and Nolan said, “We are so proud of our season's finish, a 2-1-1. However, it is much more than the score, we had fun, made friends, learned skills, and supported each other.”

The Varsity Hockey team won 8-6 against Hamden Hall on February 12. On Senior Day, KO jumped out quickly on Hamden Hall scoring five unanswered goals in the first period of the game. Mitch Autorino ’22 had two goals and an assist to lead KO in the first, while Will Berckemeyer ‘22, Aiden Marchand ’20, and Cohl D’Addabbo ‘21 also tallied goals. The Dragons came out fast in the second period pulling to within one of KO when Sean Gilland ’22 would make a neutral zone defensive play for a steal and put the puck in the Hamden hall net to go up 6-4. Later on in the thirrd, the Wyverns would add to the lead on goals by Seve Concepcion’ 22 and Cohl D’Addabbo ’21 to seal the win for KO.

The Varsity Hockey team lost 1-9 against Harvey School on February 19. On a day when KO had hoped to clinch an FAA playoff spot, the Wyverns fell short with a loss to Harvey on the last day of the regular season. The lone KO goal was scored by Sean Gilland ’22 with assists from Mitch Autorino ‘21 and Aiden Marchand ’20. Despite facing the final score and nearly 60 shots, John Mclaughlin ‘20 played all in net for the KO.

The Varsity Hockey team won 9-0 against South Kent on February 22. After a frustrating loss to Harvey in the prior game, KO bounced back in a big way this past Saturday. Mitch Autorino ‘21 led KO with three goals in the game for the hat trick. Seve Concepcion ’22, Shane Dawson ’20, Cohl D’Addabbo ’21 (2), Teddy Crowther ’22 and Aidan Marchand ‘20 rounded out the scoring. John McLaughlin ’20 and Gabrielle Abramson ’22 both earned the shutout in net for KO.

Squash
The Middle School Squash team lost 2-5 against Hopkins. Hopkins proved to be a formidable force and our players faced some challenging moments. Despite the high level of challenge, our players put in the effort and maintained focus on the court. We want to thank Eleanor Farquhar ‘26 for her willingness to play a second match and Ryan Sadowsky ‘25 for his perseverance and support of his teammates.
Back