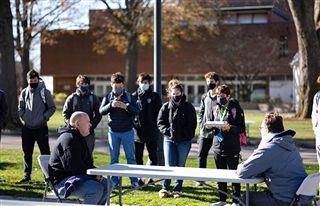 11/27/2020
Statistically speaking, learning is way more fun when it is hands-on. And even more so when it involves your teachers cracking raw eggs on their heads.

Tracy Deeter’s AP Stats class recently explored the concepts of randomness, probability, and simulation through a number of activities. They started off the unit investigating whether Pepsi had their math correct in its recent promo contest for their 20 oz. bottles of soda. Some of the caps had the words, “Please try again!” while others said, “You’re a winner!” Pepsi advertised the promotion with the slogan “1 in 6 wins a prize.” Deeter’s class explored to see if the claim is true. They also investigated the idea of independent events by first collecting data on whether or not people could "taco tongue" and/or "evil eyebrow."  Students used two-way tables and tree diagrams to help them compute the probabilities of various scenarios.

The concluding activity was egg roulette, which has been a popular event televised on The Jimmy Fallon Show Students watched a clip of Fallon playing against actor Tom Cruise and worked out the answers such as: How likely is it that Tom Cruise would lose that quickly?  Find the theoretical probability of Tom losing after three draws. Find the probability that the second egg chosen is raw? Would you rather go first or second in this game? It also begged the question - how can we watch this in action?

Insert the KO roulette version, an egg-off between Head of School Tom Dillow and Head of the Upper School Dan Gleason. In a truly epic showdown, Gleason started off the roulette by selecting the first egg which when crushed was….raw! Dillow proceeded to pick one that he found out upon cracking was hard-boiled. In his second selection, Gleason surprisingly picked another raw egg.

Since the contest would have typically ended after three eggs with Gleason, students calculated the theoretical probability of the game being over after the three eggs to be 9.09%. But in a true competitive spirit, Dillow and Gleason continued to play, and Gleason somehow did the impossible in selecting the remaining two raw eggs, proving Dillow to be the landslide victor. Watch the full (epic!) video here.

While overall a friendly competition, it didn’t happen without some good-humored ribbing from the risk-taking competitors. Dillow said, “Did Dr. Gleason get unlucky? Sure, I guess a little bit. I get that he's upset, going on and on about "statistical improbabilities" and whatnot, but the fact is, I trained really hard for this event. For the past four weeks, I have spent hours each day, carefully picking eggs out of a carton and smashing them on my forehead. It takes practice and commitment, and I'm sorry that Dr. Gleason didn't put in the necessary time to come out on top."

Students were then asked to figure out the likelihood of Gleason choosing four eggs and having them all be raw. The likelihood of that happening was 0.002 or .2%. Gleason said, “I was happy to lose, and lose repeatedly, against all odds, in the name of science and learning. I was really hoping that students would get to see Mr. Dillow crack a raw egg on his forehead -- and I even pushed the game past its normal stopping point (when one person cracks two raw eggs) -- but students didn't get that chance. Instead, they got to see the wildly improbable event of me getting four raw eggs in a row!”

The million-dollar question: To whom does Dillow dedicate his victory?

"To follicly-challenged people everywhere. Look, we all know Dr. Gleason's got an impressive head of hair, and this whole COVID thing has let him grow it out even further. I have to admit that I felt okay to watching those raw eggs crack open and mess up that perfectly coiffed head of his."

“I may need to challenge Mr. Dillow to a rematch,” mused Gleason. “After all, what are the odds of that happening twice in a row?”