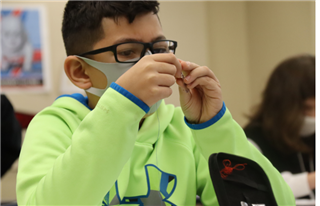 12/14/2020
In a normal year, our Upper Prep drama students would be singing, acting, and dancing in class, but with COVID-19 protocols hampering some activities, Theater Director Kyle Reynolds had a few tricks up his sleeve to make sure that learning was deep, authentic, and engaging to his young students as it's always been.
First, Reynolds shifted the curriculum to focus on musical theater appreciation so the students would understand Broadway, see how amazing it is and how they could connect to it. The second unit was to read a play together,  Almost Maine by Jack Cariani. (KO staged the performance of Almost Maine in the fall of 2017). Each student selected a character to unpack and create a vision board of the character. The students developed a creative array of boards consisting of earmuffs, snowballs, work boots, ski parkers, and even bald pates reflective of their understanding of the character. In the final step, the students are creating and sewing (yes, sewing!) costumes for their selected character based on their vision board.
In one class recently observed, you could hear (pardon the pun) a pin drop. The costume designers were focused and diligent as they pulled their needles through the fabric. So far the students have practiced a running stitch, a back stitch, and a loop stitch. So why not just draw a picture of their character?  “In a world where we can’t do many things hands-on, this was the most collaborative and hands-on project I could think of. We can do only so many videos and so many worksheets. It’s time to be hands-on in a global pandemic in a way that serves us authentically and builds our interdisciplinary skills,” Reynolds said.
According to Reynolds, the students are deciding who in their class is a “sewing master” and are quick studies. One student shared that his jacket broke, and he was able to mend it with the skills he recently learned in class.
"When I told the class they would be sewing,” Reynolds said, “they immediately asked 'Where are the machines?' I said, ‘Gosh, no!’ They are actually using their hand skills. How many things can you say that about?”

Reynolds made sure to have some extra bandaids on hand in class but to date, he has reported no casualties.
Back