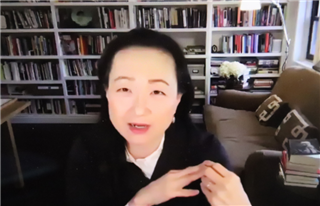 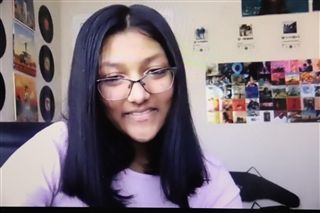 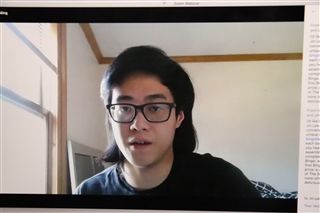 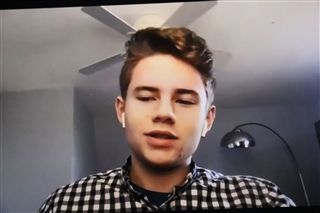 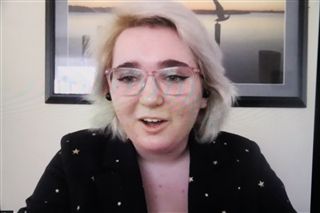 Author Min Jin Lee Encourages Students to be the Change

1/14/2021
Kingswood Oxford’s 38th Baird’s Symposium author and National Book Award finalist for Pachinko, Min Jin Lee spoke to the school community on a platform that we have become all too accustomed to since March - via Zoom in her cozy New York City office dominated by a wall of shelving spilling over with books where she said she “reads and writes and occasionally hides from my family.” Despite the lack of her physical presence, Lee displayed warmth and generosity of spirit that was at times part motivational speaker and part therapist to her young audience.
Dr. Heather Wayne, the Symposium instructor for this year, introduced Lee and shared that Lee’s stories center on the Korean diaspora and illuminate stories running the gamut from “triumph, hardship, cruelty, kindness, wealth, deprivation, oppression, resistance, despair and hope.” Throughout the year, her fortunate class absorbed all of Lee’s works and displayed their understanding and connection to her oeuvre through op-eds, personal essays, blog posts, speeches, essays, literary criticism, and poems, as less traditional means like Instagram posts, memes, paintings, board games, food drives, cooking videos, and a fully operational pachinko machine. The students compiled their reflections in a literary magazine that revealed the deep insights and mature thoughts about not only Lee’s writing but on their own lives. “What I’d really like you to know about Ms. Lee today is the urgent and unapologetic sense of moral conviction that she expresses in her writing. Min Jin Lee charges us to see others' full humanity. She invites us to work collectively in community so that we can make the world more just and compassionate for the generations who follow us,” Wayne said.
Lee told the audience that she had been thinking about them and proceeded to enumerate the various anxieties (parents, weight, identity, sexuality, drugs) and desires (love, wealth, fame, dreams, big ideas) of this special age group. She told them she knows things about them because she is paying attention and exhorted the listeners, in the words of the 19th-century author Henry James, to “Try to be one of those on whom nothing is lost.”
“You must try to be someone who notices almost everything. As you pay careful attention be someone who is open to ideas, observations, and images. I’m not asking you to be anything or do anything that is harmful. In fact, I want you to have an edge in life. To have an advantage. And you will have this for free if you pay attention to the world. The world needs your attention. And if you pay careful attention you will have what you need to make good decisions to make good relationships and you will be able to create good things from the things that you hold dear in your heart,” Lee said.
Following her talk, the students fielded pre-selected questions from the student body. One student inquired who Lee’s favorite character was in Pachinko. She shared that it was the emotional, unruly, and unscholarly Moses because she believes he is a good, honest person who shows up every day. Another student questioned the role of women in Pachinko who are often depicted as downtrodden. As an avowed feminist, Lee said that the world is unfair to women even though great strides have been made. She granted that audiences don’t want to read or hear an angry woman write so instead she uses her stories to convey the reality around her about the plight of women. By sharing these stories, Lee hopes to galvanize her audience to make changes.
Pachinko begins with a poignant and profound first sentence “History has failed us but no matter." One student asked who was the “us” that is referred to in the opening line. Without hesitation, Lee responded that the “us” is all of us at this moment in time.
“I think history is failing us right now,” Lee said as she offered the example of the daily toll of over 4,000 dead Americans from the COVID-19 crisis.  “I think we have to keep thinking about it and talking about it and not taking it for granted. And be outraged. We witnessed a coup this week. That was insane. I don’t want young people especially to be cynical about this. It’s a very serious thing. We have to respond to it with emotion and intelligence and also with strategy. What will we do to make things better? As an adult, I want so much to encourage you to never become cynical about the problems that we see. I see too much eye-rolling. Memes are great, but history is not a meme. We need to think about what we can do to fix it.”

Founded in 1983 by Warren Baird, then chair of the KO English Department, the Baird English Symposium has welcomed some of the nation's most renowned writers, poets, and playwrights, including Arthur Miller, John Updike, Tony Kushner, Joyce Carol Oates, and Colson Whitehead. To prepare for the author visit, students in all grade levels read at least one work by the writer, and students in the Senior Seminar class read the author's work exclusively.
Back