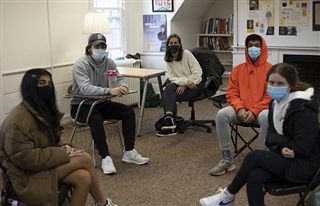 1/21/2021
The Witness Stones Project is an ongoing one in the Kingswood Oxford School history department each year that engages the students in authentic, real-world learning. The project seeks to honor the humanity and contributions of the enslaved people who helped build the community we live in today. Since its inception in 2019, students work to build on the work that was done by classmates before them. Each year, different pieces of the puzzle are uncovered, carefully put into place, and a bigger piece of the local historical fabric completed.

With the help of local historians Dr. Tracey Wilson and Liz Devine, students learned about a man named Peleg Nott, who was enslaved by Jeremiah Wadsworth. Peleg Nott served in the Revolutionary War in 1775 and returned to the West Division (later named West Hartford.) He was elected “Black Governor” in 1780 and eventually freed. Peleg Nott died c.1810 when he was around 60 years old.

Under history teacher Katie McCarthy’s tutelage and careful eye, the project has become a pillar in the curriculum. She brings palpable energy and genuine passion to the lessons and greater cause. By enlivening and making relevant history for her students, McCarthy empowers them to be change agents. To say it has had a profound impact on those in her classroom would be a vast understatement. Isaias Wooden ’22 said, “This is unlike any other project where you are researching things you already know. I felt like we were actually working on a breakthrough like we were on the cusp of something. Learning about the fact that there were slaves in West Hartford, an area that I have been in my whole life is profound. Peleg Nott walked down the same street that I walk down to play basketball. On the same street that I used to go get ice cream on! It is a much different feeling than going into an Encyclopedia Britannica to learn about something.”

Wooden and classmate Garrett Gallup ‘22, teamed up on the most recent class project for the Witness Stones in which they produced an informative podcast entitled, “Peleg Nott’s Story.” Efforts are ongoing to create a QR code linking the podcast to Peleg Nott's witness stone in Old Center Cemetery in West Hartford, providing visitors the opportunity to learn more through their recording.

Another team of students, Regina Miller ‘22 and Aliza Sadiq ‘22 wrote a proposal to the West Hartford Town Council, in which they outlined their reasons to rename New Street in Blue Black Square after Peleg Nott. It was published in the West Hartford News, and just recently the West Hartford Town Council accepted the proposal and will make a decision if they will implement it. “Enslaved people in West Hartford have, for the most part, been folded into the corners of history,” wrote Miller and Sadiq. “Peleg’s enslaver, Jeremiah Wadsworth, has an entire museum dedicated in his name, and others who benefitted from slavery have their names around town, such as Sedgwick School and Whiting Lane. Meanwhile, not even a street in West Hartford is named after a person of African descent.”

Through their research, the students discovered in addition to Nott, there were at least 70 enslaved people in the town of West Hartford. Gallup said, “A lot of people don’t know anything about these people. Our job is to inform those that don’t even know about them in this project.” Easier said than done. Gallup also revealed how difficult it was to find information. “You can’t just Google it and find a bunch of sources on the topic. You have to do your own research and that is also very limited and from a long time ago.”

Needless to say, this is crucial work that is being done. Even more so, this is work that these students are passionate about. Miller said, “With this project, we are being taught how far we have come and this project showed us that and us how far we have to go. It showed us as students all the steps involved us and how we can make these steps.”
One piece of significant progress will take place on June 19, 2021, when the center green in West Hartford will be renamed from Goodman Green to Unity Green. Additionally, Peleg Nott’s plaque bearing his name will officially be placed on the ground.

“My wish for you all as your teacher is that you see the power you have as students,” said McCarthy in her most recent check-in with the students on their projects. “Really you are shaping history; you are informing people, you are changing the narrative in a way that not everyone might not want to hear but that is an essential way. I hope you realize the agency that you all have at this point in history.”