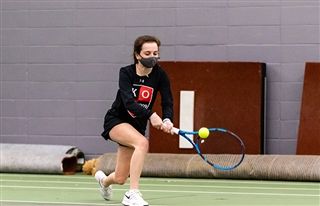 5/13/2021
Golf
The Varsity Golf team closed its abbreviated season with a 5-0 victory over Marianapolis at Connecticut National Golf Club on May 7. The team arrived to discover a change in format from the traditional stroke play to match play instead. Unfazed, the Wyverns won all five of their individual matches, led by Captain Henry Krieble '21 at #1 who won 3 and 1. Cole Banning '24 won one up in a match that was close the entire 9 holes. Teddy Keegan '22 and Kyle Frankel '21 both closed out their opponents early, 3 and 2, and Cohl D'Addabbo ‘21 was victorious 2 and 1.  The linksters finished the season 1-1.

Lacrosse
The Varsity Boys’ Lacrosse were in a nail-biter against Hamden Hall on May 5, ultimately losing 9-10. It was a game of back and forths, with each team getting momentum throughout the game. In the 4th quarter, Hamden Hall got out to a 3 goal lead. The KO boys fought their way back, and got to 1 goal back with a minute left. With a last-minute scramble, KO was unable to find the back of the net, and Hamden Hall went on to win 10-9. Alex Levin ‘24 started in goal and finished with 7 saves seeing 17 shots. The defense was lead by a strong unit of Pat Schwab ‘22, Conor Caneday ‘22, and Graham Wiggenhauser ‘25.

Tennis
The Varsity Girls’ Tennis team defeated Wooster 9-0 on May 8. The Wyverns came out strong sweeping the three doubles points, highlighted by Christina Mullen ‘23 and Abby Baier ‘23 making a triumphant debut at #1 doubles. KO went on to sweep the six singles matches as well playing good consistent tennis throughout.

The Varisty Boys' Tennis team lost the match 5-2 against Wooster. It was a competitive, hard-fought match, but we came up short. Jaden Weinstein ’21 was impressive at #2 singles, winning in straight sets. He and Jacob Schwartz ’21 teamed up to win at #1 doubles, as did Wil Elliot ’21 and Ciaran Concepcion ’26 at #3 doubles
Back