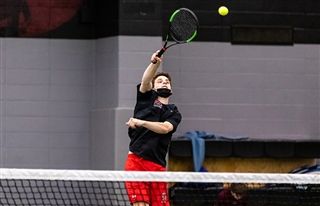 5/27/2021
Lacrosse
The Varsity Girls’ Lacrosse team played St. Luke’s in their final game of the season and lost 19-11. After celebrating their seniors the Wyverns came out strong in the first half and took an early lead. St. Luke’s came back to tie the game and then go up one at the half when KO was a man down and they carried that momentum into the second half. The Wyverns continued to fight St. Luke’s and the heat throughout the second half, but it wasn’t meant to be. Chayse Shamleffer ‘23 faced multiple shots but ended the game with a very respectable 14 saves. KO had seven girls find the net. Tori Swanson ‘21, Abby McLaughlin ‘22, Caroline Dawson ‘22, Alle Kotowitz ‘23 and Abby Congdon ‘25 all contributed one goal while Kaiya Deurloo ‘22 and Ellen Jacobson ‘23 had three goals each. The girls are looking forward to next season with a strong core of returning players and the hope that we will have a normal season.
Tennis
The Varsity Boys’ Tennis team came away with a 2-5 loss in their final match of the season against Wooster on May 21. Coach Andy Krugman said, “This was truly a team effort as a number of guys played up in the lineup due to some absences due to health and family commitments. The team fought hard and the result was a 5-2 loss, the same score from a few weeks back when we were at full strength. I was proud of how hard we played and the composure we showed. Although senior Wil Elliot ‘21 was unable to play due to illness, the other three seniors gave it everything they had.” The Wyverns dropped the doubles point, and after a slow start, sophomore Will Jacobs ‘23 and Pratt Blair ‘26 made a good comeback but fell short at #2 doubles. Jacob Schwartz ‘21 had arguably his best day of the season as he teamed with fellow senior Jaden Weinstein ‘21 to win at #1 doubles, and then followed this with a straight-sets victory against an opponent that had beaten him in straight sets earlier in the season. Krugman said, “It was the best tennis I’ve seen from Jacob, and it is safe to say that he finished his KO tennis career playing his best. Jaden Weinstein had another impressive day, as he won his singles match in straight sets as well. Jaden has been a consistent, mature presence all season. I have always said that senior leadership is the key to a successful season, and one does not need to be a captain to be a great leader. That was certainly the case with Jaden.” Ethan Raisner ‘21 battled so hard but came up short in a lengthy match against a smart and crafty opponent. It was a rematch from a few weeks back, and this match was much, much closer showing the strides Raisner made this season. Krugman said, “He competes with the kind of attitude that any coach is thrilled to see.” Although the Wyverns lost in straight sets at the other singles spots, Jacobs and Sean Gilland ‘22, and Shumayl Shiek-Syed ‘22 worked hard and gave it their best shot as they all played up in the ladder. As did Seve Concepcion ‘22, who lost to a talented player in the #7 exhibition match. Krugman said, “It has been a most unusual season in terms of protocols and schedule, but it was fantastic to get on the courts and have a season. I have enjoyed this group as much as any group I’ve coached! Good luck to the seniors next fall as they head off to college, and I’m excited to have the rest of the group back next spring.”

Track & Field
At Hopkins School on May 22, the KO Wyverns defeated the host school as well as smaller contingents from Hamden Hall and St. Luke’s. The girls won 78 to 58, and the boys won 75 to 56. In a day of many personal best performances, the Wyverns concluded a season of substantial improvement, growth, and development.  Coach Watson reflected, “This day was as close to a championship event that we have had in two years.  And I am so excited that we were ready--we warmed up well, we had our passes down, we had our starts, we had our technique.  It was a beautiful day where KO athletes rose to the occasion event after event throughout the whole meet.” Visit this link for a full recap of the day.
Back