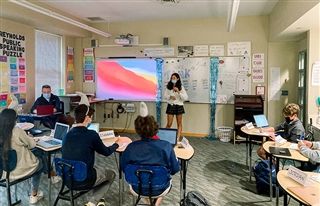 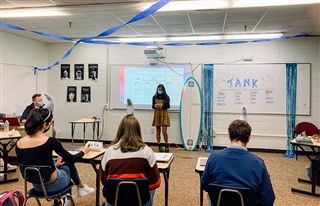 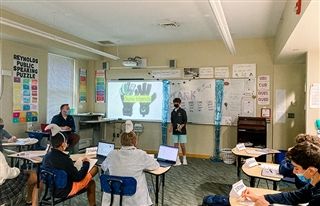 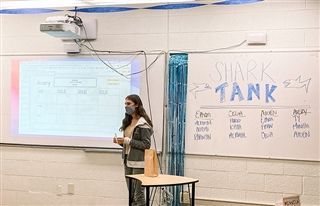 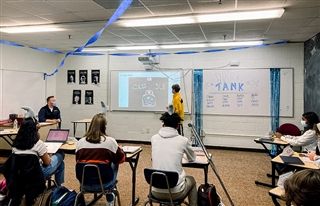 11/5/2021
All fins on deck. In both his Upper and Middle School public speaking classes, Kyle Reynolds harnessed the creative inventor and inner entrepreneur of his students as his classroom transformed into a set of the ABC critically acclaimed and multi-Emmy® Award-winning reality TV show Shark Tank.

For their assignment, students were tasked with coming up with an innovative and never before invented product (aka lots of Googling to make sure what they came up with didn’t already exist), accompanied by a business plan with numbers to support their idea. The plan included how many items of each they had sold, how much debt they accumulated, what their percentage of profit was based on the cost to make and what they were selling for, and finally what investment they were asking the 'sharks' to give them and for what percentage of their business. (For example, $500,000 for 10% equity in the company, or $300,000 for 5%. )

If not presenting, the others in the class rotated the four positions of 'sharks,' donning fin hats, and scribbling down the numbers on whiteboards while asking questions as they calculated whether it was a business risk they wanted to take. Each member of the class was given $1 million as a 'shark' to invest in the business(es) of their choosing. Many came back with counteroffers of the amounts or percentages the entrepreneur was requesting, splitting up their investment with some cash along with partial lines of credit based on the success of the product. Still, others determined based on the package and product it wasn’t worth the risk and announced in the famous words of the TV show, “I am out!”

In line with the school's strategic vision and commitment to bringing cross-curricular opportunities to the students, the project was a natural and effective way to tie subjects together. The project encompassed English through the research and writing of the product they were pitching and a strong math component as students had to think on their feet as they crunched numbers to determine if a product pitch was worth their investment. And of course, students also had to hone their public speaking skills and powers of persuasion as they worked to convince their 'shark' investors why their product was worth the time and money.

Upper School products included a state-of-the-art blender with a myriad of fancy levers and gadgets to make the blending experience a more enjoyable one, a surfboard equipped with Bluetooth speakers to make the waiting for the next wave experience a more relaxed one, a golf ball equipped with a tracking device, and a hockey puck that got rid of the smelly gym odors by harnessing the absorbent power of natural cedarwood.

Middle School student pitches included soccer goalie gloves (Sure Hands) that had removable fingertips so players could tie their shoes on the move, a high-end toothpaste that combated and prevented cavities, a garbage can for your glove compartment, and Flip It, a device that automatically turns the page of a book for you.

Students were judged in a variety of areas including content (their invention and knowledge of the product, their pitch, and their Shark Tank etiquette), speaking (enthusiasm, engagement, eye contact, hand gestures, volume, and rate). Judging had another set of grading criteria including the relationship with the pitch, asking clarifying questions, calculating valuation, offer, and negotiation skills. At the end of each set of presentations, students critiqued one another and showed a ton of support for what they thought each did well, as an entrepreneur or a 'shark.'

Whether their invention got the stamp of approval or not, it was a fun, interactive project that made the world of entrepreneurship, finance, and calculated risk come alive - one that students could really run with and sink their teeth into.
Back