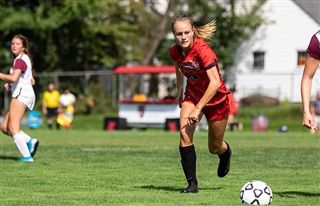 11/4/2021
ESports
The ESports KO Splatoon 2 played Granby Junior Senior HS, MA, and came away with a 5-0 win on Oct. 26. Having gone two weeks without a true competition due to an opponent's forfeit in Week 3, the KO Inklings were chomping at the bit to get underway. As the game lobby took shape and the Wyverns saw that the opponents' player levels were comparable to their own, they knew this match would be different - they had a chance to truly compete. Compete they did. The Wyverns made short work of the team from Granby, MA, starting with an overwhelming victory in the initial Turf War game, and each player made significant contributions to the win. Alexa Prahl '24 was essential to a quick Rainmaker victory, driving down the map without hesitation, flanked by her teammates, to secure a victory within three minutes. In Clam Blitz, Esther Arimoro '24 and Ray Chen '25 drove the ball home, with each opening up the opponents' goal several times in the game. Ella Chen '25 was critical in Splat Zones, helping maintain dominant color coverage not only in the designated zone but also by pushing up against the Granby spawn zone, keeping them on their heels. The 5-0 victory brings the Wyvern Inklings to 2-2 on the season heading into Block 3 - and the final push - of the season.

The ESports League of Legends played Fuqua School, VA, and won 2-0 on Oct. 26. The Wyvern League of Legends five-stack set up against Fuqua School in Virginia this week and, after a tough 1-1 split the week prior, was able to sit back and enjoy themselves during this week's match. The Fuqua team, full of new players, put up very little organized resistance in game 1 of the two-game match, and KO turned what is typically a long, calculated game into a bit of a rout. Headed into game 2, the mostly veteran Wyvern group of Mason Goldschlager '22, Johnny Kung '23, Michael He '23, Ben Baby '22, and Eason Tang '25 decided to extend a friendly, three-minute, fight-free farming period to the Fuqua team to start game 2. Given that their opponents were less experienced, the Wyverns wanted to give them a greater chance to have a more competitive game 2 to end the match. Despite the three-minute grace period, the Fuqua was unable to organize their play enough to counteract the experienced KO group, and the Wyverns drove home a speedy game 2 victory to bring home a solid win on the season, and to move themselves to 5-3 headed into Week 5.

The ESports Rocket League played Lincoln HS, RI and came away with a 3-0 win on Oct. 27. Still smarting a bit from a tough loss to the Week 3 opponent, the Wyvern drivers got set up and ready early to settle in to their game against nearby Lincoln High School, in Rhode Island. Their opponent unfortunately was unable to field a full team for the engagement, but because league rules permit at 3v2 match as league legal, the game carried on. Despite being a man down, the Lincoln Lions fought hard to stay competitive against the Wyverns, but the Form 4 power trio of Will Jacobs '23, Cole Ellis '23, and Kodi Ezegbo '23 kept the pressure on from start to finish and swept the series, going 3-0 right out of the gate. Multiple goals by Ellis and Jacobs kept the Wyverns easily ahead, and the KO team cruised to a smooth victory, and a 4-1 record on the season.

Field Hockey
The Varsity Field Hockey team won 2-1 against Holy Child on Oct. 29, and KO wore pink to represent breast cancer awareness month. Alyssa Pavano ‘22 scored an early goal off of a breakaway and Arie Lang ‘22 scored off of an attacking corner to take the lead 2-0. The Wyverns connected very well on the field holding possession for the majority of the game. Many underclassmen got playing time and Ashley Buckingham ‘24 earned the game ball by helping the team win 2-1.

The Varsity Field Hockey team won 9-6 against Wilbraham & Monson on Oct. 30. The Wyverns dominated the 7v7 full field game. Amazing statistics from many players on the team including, Alyssa Pavano ‘22 with four goals, Arie Lang ‘22 with two goals, Ella Wilson ‘25 with two goals, Abby McLaughlin ‘22 with one goal, Caroline Boardman ‘22 with five saves, and Stella Zimmer ‘25 with eight saves. Everyone on the team earned playing time and showed great confidence on the field. One of those was Zimmer who earned the game ball and stepped up as an underclassman in the goal.

The Middle School Field Hockey team won 1-0 against Hamden Hall on Oct. 27. The team made the trek down on a cold October afternoon for their second to last game of the season with high hopes of taking home another win and did just that. It was a very close game with each team battling to get the ball in the back of the net. As the first half was coming to an end, KO knew they did not want to go into the half in a tied game, so giving it all they had, Sierra Wells ’27 made a strong pass to Lila Wedeles '26 who swept it into the goal for the 1-0 lead minutes before the buzzer went off. After the quick halftime conference, the team went back out fueled with excitement to hold the lead. During the second half, Brigette Russell ’26 and Lily Margolis ’26 held down the fort defensively while Abigail Wildstein ’26, Taylor Benavides ’27, and Ella Cipriano ’28 played solid offense and midfield creating many corners and keeping the ball wide to the sides. Altogether the girls contributed to helping secure the win. The Wyverns advance to 3-2 on the season.

Soccer
The Varsity Girls’ Soccer team lost 1-3 against Hopkins on Oct. 27. On a cold and windy day, the team was up one goal 17 minutes into the game with a shot by Olivia Schaller ‘25, assisted by Kaiya Deurloo ‘22. Hopkins answered with two goals of their own to end the half 1-2. KO had chances in the second half, but a goal midway through the second half sealed the victory for Hopkins.

The Varsity Girls’ Soccer team had their best performance to date on Oct. 30 against Hotchkiss but came away with a 1-3 loss. The team scored 16 minutes into the game on a cross by Sophia Radmanovich ‘24 and converted by Olivia Schaller ‘25. Hotchkiss tied the game on a penalty kick with 4:30 left in the first half. While the outcome did not go as desired in the second half, the Wyverns pace of play, ball movement, defensive prowess, and offensive output were top-notch, even in the wind and rain. Kyra Dunnirvine ‘23 came off her line well which limited Hotchkiss' scoring opportunities.

The JV Girls’ Soccer team played a close game with Berkshire Academy on Nov. 3 and came away with a well-earned 2-1 win. The score was tied 0-0 at the half with both teams only getting three shots off on goal. KO struck first in the second half on a goal scored by Dani Tippner ‘25. The Wyverns kept the pressure on the Bears' defense which led to our second goal scored by Tess Chapman ‘23. The Bears made a run at KO in the last seven minutes when they found the net for their first goal. The KO defense, anchored by Yzzy Albert ‘25, Pauline Golder ‘24, Liv Gallup ‘25, and Piff LaBoy ‘23 in goal, held off multiple runs at the goal in the last five minutes to come away with the win. Albert also played a strong first half in goal for the wyverns.
Volleyball
The JV Volleyball team advanced to 11-0 on Oct. 30, beating a scrappy and offensively unconventional Miss Porter’s squad, 3-1. Captain Lucia Martinez-Castro ‘23 shined in her serving, including in the last set to secure the victory. She and Alex Segal ‘25 also did very well backing each other up on the front line, as Porter’s sent the ball back with surprising speed. Jhanvi Daddala '23 and Abby Baier ‘23 also served well. Sophie Glazier ’23 and Diya Mistri ‘24 also assisted with tips from the front line, helping catch Porter’s defenders off guard. The whole team should be commended for adjusting well while keeping true to our disciplined style of play. We look forward to our game against Loomis Chaffee on Wednesday.

The JV Volleyball team lost its first game of the season on Nov. 3 against a very talented Loomis Chaffee squad. JV showed tremendous heart by hanging in in the face of excellent serving and hitting from Loomis, with our team improving its score with each set. It was a strong defensive effort on JV’s part. Abby Baier ’23 had a great defensive game, while Alex Segal ‘25 also did well fielding low and hard serves. Captain Eve Repp ‘23 showed great grit, including successfully blocking on a considerably taller Loomis player. On offense, the serving of Jhanvi Daddala '23 deserves mention, with her going on a five-point run in the second set. JV looks to bounce back and finish the season strong against Cheshire Academy on Monday!
Back