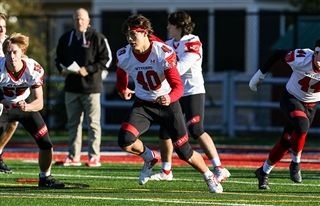 12/2/2021
ESports
The Kingswood Oxford ESports Splatoon 2 team played Caesar Rodney HS (DE) and lost 1-4 on Nov. 16. The Inklings headed into their final match of the regular season. Although playoff hopes seemed out of reach, there was still a small chance that a clean sweep could allow them to slip into the postseason. Although the game against Delaware's Caesar Rodney High School ended in a loss, the match itself was incredibly close. Esther Arimoro '24, Alexa Prahl '24, Ella Chen '25, and Ray Chen '25 played what was easily their best set of the season, and every game went to full time, with losses only by one or two points. On paper, the CRHS team was significantly better than the KO foursome, but the Wyverns made them earn every inch of their Tuesday victory. Our Tower Control and Splat Zone play, in particular, wasn't decided until the very last second. So good were the Wyverns, that the other coach was effusive in her praise of our players, impressed by their communication and coordination. While the first Wyvern Splatoon 2 season ended this week, the gains seen over the course of the past two months, combined with a young combination of two sophomores and two freshmen, show promising potential in the seasons to come.

The Kingswood Oxford ESports League of Legends vs. Riverside HS (WV) (W, 2-0) on Nov. 16. The five-stack of KO Summoners, standing at 7-5 on the season heading into the final week, saw a playoff berth in their sights. They entered their match against West Virginia's Riverside HS ranked #38 out of 109 teams in the Eastern Regional League, and they hoped to climb to the #32 spot in order to make the postseason. On Tuesday, they did everything they could to get there, quickly shutting out a Riverside team 2-0 in short order. Mason Goldschlager '22, Johnny Kung '23, Michael He '23, Ben Baby '22, and Eason Tang '25 had one of their best matches of the season, and their combined experience overwhelmed the team from West Virginia in seeming record times. With a 2-0 win to close outplay, the Wyverns found themselves in the coveted #32 spot - and looking at a playoff run - as of the night of Thursday, November 18. As of this writing, however, the Wyverns have been edged out into the #33 spot in what looks to be the final standings of the season. Although the playoff hopes appear to be dashed for this year, our team put together solid progress and growth to remain competitive until the very end. As they say goodby to two seniors, the remaining core of two juniors and one freshman provide a good core for a solid season next fall.

The Kingswood Oxford ESports Rocket League team played Archbishop Hoban HS (OH) and won 3-1 on Nov. 18. Fresh off the bus from a history trip to Sturbridge Village, the junior trio of Will Jacobs '23, Cole Ellis '23, and Kodi Ezegbo '23 settled in for a long afternoon doubleheader as they tried to keep their rankings prior to the post-Thanksgiving playoffs. Their first match, against Ohio's Archbishop Hoban, turned into a competitive 3-1 win. Our drivers played some of their best Rocket League to date, with everyone contributing to the win. Standout goals from Jacobs and Ellis kept the team on top, and Ezegbo chipped in with solid defense and new skills on offense to keep the other team guessing deep in their territory. With the win against AHHS settled, they moved on to their second match of the day.

The Kingswood Oxford ESports Rocket League team played The King's Academy (GA) and lost 0-3 on Nov. 18. Riding a high from the day's first win, the Rocket League combination of Will Jacobs '23, Cole Ellis '23, and Kodi Ezegbo '23 hoped for a sweep to finish the season with a flourish. Their opponent, The King's Academy in Georgia, was rescheduled from KO's conference day. Out of the gate, however, the match had a different tone. Although Game 1 was close, the TKA team won in the end, taking advantage of a tired KO team and demonstrating the importance of ball control out of the backfield. The match ended in an 0-3 loss, but while the match was disappointing, the overall result - a clear playoff spot - was not. Our trio of juniors looks to continue their season-long success when they play in the Round of 64 on Monday, November 29.
Volleyball
The Varsity Volleyball team played Newton Country Day on Nov. 17  in the NEPSAC tournament quarterfinals, losing 3-0 in close, hard-fought sets (26-28, 20-25, 22-25). The first set made it clear that the match would be a true battle, with both teams staying neck and neck until NCDS pulled ahead with a service run. KO’s defense eventually revved up, with Kata Mesterhazy ‘23 making some key early blocks to energize the team, and with Allie Arcaro ‘24 making much-needed digs on deep hits from the opponent. Arcaro then followed her defensive work with a service run that brought the Wyverns back into striking distance. After KO lost some morale in some longer points in the middle of the set, Lindsay Bailey ‘22 stepped on the court and the tides changed. Bailey was tipping, smashing down balls, blocking, and making aggressive net plays in the middle, and everyone in the gym felt the positive energy! Later in the set, Ava Cashman ‘24 served low and fast to put KO in winning distance, and co-captain Keira Sullivan ‘23 kept up relentless hitting and pushing deep into the opponent’s court. It was a nail-biter extra point set, and the Wyverns showed their mental fortitude throughout. Unfortunately, the team was unable to put together enough consecutive points and NCDS took the set 28-26. In the second set, KO’s offense kept running with effective setting from co-captain Mackenzie Caruso ‘22 and Jill Plaut ‘23 alternating to set up Sullivan for powerful outside hits. Cashman continued her strong low serving and provided high passes on defense. In another neck and neck battle, NCDS used solid, consistent defense to pull away at the end of the set to win it 25-20. In the final set, Naomi Wong ‘22 provided powerful hitting from the right side to add variety to the KO offense, and Sullivan changed her hitting locations to include more down-the-line strikes. Bailey was on fire with tips to the sides and diving saves to keep us in the points defensively. After a long set and a long and incredible season, the Wyverns, unfortunately, lost the match and were knocked out of the postseason tournament. With that said, there is so much for the team to be proud of this season! The hard work in practice, the battles against other schools, the extra-point sets, all of it was more than the team could have asked for, and the coaches and fans are ecstatic about the team’s great strides forward this season. We can’t wait to see what we accomplish next year! The final team record is 13-5.
Back