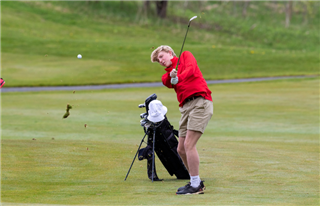 5/26/2022
Golf
JV 5/18 AOF, Loomis Loss AOF 195, Loomis 215, KO 228 A beautiful day for our last match of the year, and everyone came out to play their best golf.  It was our best performance of the season with many birdies, pars and bogeys to be had. Ryan Sadowsky ’25 lead off in the #1 spot with a 42 followed by Aidan Aube ’22 with his best match of the year with a 43. Jackson Drapeau ’24 with a 45, Arie Lang ’22 with a 48 and some incredible drives, Ilianna Brett ’24 with a 50, and Avery Hersh ’24 in her match debut with a 52. I am proud of everyone this season and so impressed and grateful for our seniors Arie and Aidan and wish them luck next year in college! Go Wyverns!
Varsity  5/14 Northfield Mount Hermon, Wilbraham, And Munson Win WM 437, KO 366, NMH 316 KO traveled to Crumpin Fox in Bernardston, Ma to take on host school NMH and Wilbraham Munson. It was an absolutely gorgeous day to play this hilly, picturesque course. This was our second 18-hole match of the year. We came out on top over Wilbraham Munson 366 to 437 but lost to NMH 316 to 366. NMH lit the stage with three golfers shooting in the 70s. Senior Lars ’22 shot even-par 72 which took medalist for the round. KO's efforts were led by Austin Perkins '26 who took the #1 spot for the week and playing # 2 Alex Braunstein ’25 with an 89. Aiden Aube '22 made his first varsity debut. Next up Hopkins is at home next Wednesday for the last regular match of the season before the Founders and the KIT.
Varsity 5/18 Hopkins Win KO 200 Hopkins 216 Last regular season match of the year at home against Hopkins School. Gillette Ridge was in great shape and certainly gave the competition some challenges. KO took to the task and defeated Hopkins with a score of 200 to 216. Cody Brew '23 for the sixth time this year puts up a medalist round with a score of 1 over 37. Max Sams '23 firing a 2 over 38. Max played lights out. Cloud Que ’24 with a 41, he's back! Alex Braunstein ‘25 with a 42, Austin Perkins ‘26 with a 42, and Ty Russo ’24 with a 49. Great day at the Ridge for the Wyverns. It has certainly been a fun season. It is not over yet. We have two more days of golf to go and they are sure to be exciting. We have the Founders coming up on Saturday featuring Cody Brew, Austin Perkins, Alex Braunstein, Cloud Que, Ryan Sadowsky, and Aidan Aube. The final event is the biggest event of the year known as the prep school championship aka the KIT. Next Wednesday the 25th at Oak Ridge Golf Club.
Tennis
Boys’ Varsity 5/18 Salisbury Win 6-0 KO capped its season with a 6-0 victory on Wednesday afternoon. Due to the late starting time, both teams agreed to play singles first and forego the doubles if the match was determined after singles. Everyone played well, led by the seniors who played their final match on Senior Day. Max-William Kanz ’22 won in straight sets at #1, Teddy Keegan ’22 won in a third set super tiebreaker (11-9), and Koby Braunstein ’22 played quite well in a straight-sets win at #3. Sean Gilland ‘22 played well at #6 singles in a hard-fought straight-sets win. Rounding out the victories were Ciaran Concepcion ’26 at #4,  Will Jacobs ’23 at #5, and Will Maclean ’25 at an exhibition #7 match.  It was a fine performance by all in the season finale.

JV Girls' 5/21 Pomfret Loss 1-5 KO played their final match of the season on Saturday. Under a blazing sun, the team faced a generally well-matched opponent in the form of the Pomfret squad. Due to injuries, two players played in both singles and doubles; Keysy Lopez-Diaz ’24 and Anna Ollenschleger ’25 should be commended for their willingness to help the team and their grit to play hard in both matches, especially in the unusually high heat. Saanve Bathula ’24 and Keysy Lopez-Diaz ’24 came away with a doubles win, 6-3, while Francesa Lamattina ‘25 played a tight match, losing 4-6. Despite the heat, the team had fun and smiled throughout the match, in classic JV Girls' Tennis style.
Back