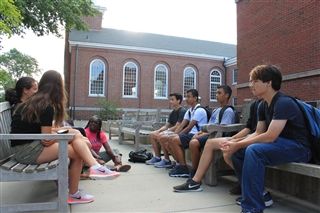 How to Help Children Cope with Political Polarization

12/4/2017
Joan Edwards, Director of Diversity, Inclusion, and Cultural Competency
It’s no secret that we are currently living in a climate of political, social and cultural divisiveness. Mistrust festers among Americans over race, class, geography, religion, political ideology and gender orientation. In recent decades, many of us have retreated to our own islands of belief – protected, isolated petri dishes where everyone agrees with one another.

As this battle roars on, our children are caught in the crossfire. This extreme polarization affects their friendships, classroom discussions, and even family relationships, adding to the anxiety they may already feel about schoolwork, athletics, activities, and relationships.

What can we do as parents, teachers, and advisors to guide children as they seek both to understand this discord and also to play a role in reducing it? In my role as Director of Diversity, Inclusion and Cultural Comeptency where I work at Kingswood Oxford, a private school, I have found these guidelines to be healthy and productive to meaningful conversations with my students.

Explain why this is happening
One way to help reduce adolescents’ anxiety about the current polarization is to explain the forces that are causing it. Our media thrive in ratings and revenue by playing up conflict, so news stories are saturated with words and images of anger, hostility, and resentment. The devolution of the national news media into “liberal” and “conservative” news outlets has also played a role.
Another prime driver of this discord is the Internet. Its instantaneity and anonymity invite insulting, demeaning and angry postings that are much more difficult to say in person. Facebook, Snapchat, Twitter, Instagram and other apps thrive on a “hashtag mentality” designed for us to quickly determine what we believe to be the condensed version of the issue. Within our social media networks, we operate in an ideological echo chamber as people we have admitted to our circle of “friends” click and comment as they mostly share our interests and beliefs. We are, in effect, really talking to ourselves.

Encourage thoughtful introspection
Both adults and adolescents can benefit from challenging their own beliefs. Courage comes from questioning what we hold to be true and right. We can inspire courageous and thoughtful self-awareness if our students can ask themselves: What hidden biases might lie beneath my viewpoints? Why do I hate that group so much? Why am I afraid to speak to someone who disagrees with me? Why do I doubt the authenticity of that group of students who want to be friends with me? Such self-reflection can lead to a greater understanding, not only of one’s own motivations, but also those of others.

Advocate exploration of a range of ideas or opinions
Let’s challenge our children to leave their islands of belief and sail to other shores. How can someone authentically understand the culture of another country without going there? This takes courage. We can suggest that our child seek out one other student who holds views different from his or her own and, then to ask that student, in person, why he or she holds those beliefs. Engaging in such constructive, mutually respectful, face-to-face conversations can break down misconceptions and hostility and lead to the surprising discovery of common ideological ground.

Ask open-ended questions
Instead of posing questions that elicit only gut responses, e.g., “What do you think of President Trump?” we adults can initiate more broad-minded discussions with questions such as, “Is political correctness killing conversation?” or “Why do you think our nation is so polarized right now?”
Prompts like these challenge students to lean into the gray area and explore complexities and contradictions. Recent studies have shown that students develop a greater sense of belonging and connection in a school where such topics are debated rather than swept under the rug.