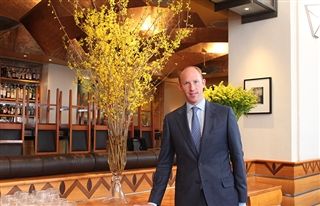 The Best Restaurant in the World

4/11/2018
Jackie Pisani
When we approached Billy Peelle ‘01, the self-effacing General Manager of New York City’s Eleven Madison Park, about writing this article, he asked that the piece not be about him but about his team. The restaurant was recently named the Best Restaurant in the World by the World’s 50 Best Restaurants List presented by San Pellegrino in April in Melbourne, Australia. He graciously deflected, “The people I work with are the most important thing. They’re incredible.”

So while we’ll try to keep Peelle’s presence to a minimum, it’s hard not to acknowledge his impact on this highly lauded restaurant since he personally interviews every member of the restaurant staff of 150 including a dining room staff of 90. “You need to dig deep and find the right people,” he said. “I know who they are. I don’t care about degrees. I want people who want to learn, who are genuine and really nice people. The best restaurant people aren’t just talking about zucchini. They have dimension and interests so they can connect with people. At the end of the day, we are creating experiences, and I want people who love to do that and take great pleasure and pride in looking out for others.”

Located in the north tower of the old Metropolitan Life Building, overlooking Madison Square Park, Eleven Madison Park occupies the street level in a former hall once used by Metropolitan Life for special company events. In the quiet, off hours, there’s an air of expectancy as staffers iron table linens into crisp sheets and polish stemware. Despite the overturned chairs, which would be filled to capacity in a few short hours from now until June (it takes that long to get a reservation), everything within the space suggests a restrained opulence. The room is at once grand and warm: 30-foot ceilings, enormous forsythia branches, and vases spilling with bowl-sized, double-blossom yellow tulips tinged with varying amounts of scarlet. Art deco notes suffuse the space with decorative woodworking inlaid with ash and walnut, chevron pattern terrazzo floors, and polished steel cladding that ribbons the front wall. If God is in the details, one could certainly wonder whether heaven is in close proximity to New York’s Flatiron District.

Originally the brainchild of culinary messiah Danny Meyer who founded the Union Square Hospitality Group consisting of Union Square Cafe, Gramercy Tavern, and the wildly popular Shake Shack among others, Eleven Madison Park opened in 1998. Chef Daniel Humm and restaurateur Will Guidara partnered in 2006 to run the restaurant by Meyer and subsequently purchased it from him in 2011. Since then, there’s been a steady ascendancy in accolades and rankings. In 2010, Eleven Madison Park joined an elite group of the world’s best 50 restaurants, while garnering a four-star rating from The New York Times in 2009. In 2011, the restaurant achieved the ever-elusive three-star Michelin rating, the first ever restaurant to garner three stars from one in a single year.

Peelle explained that more revered four-star New York restaurants located north of 42nd Street were ripened with a stodgy, French formality. So, taking a cue from the old guard’s impeccable service and precision, Peelle said the owners of Eleven Madison Park wanted to invent something new. “We wanted to be the four-star restaurant for our generation, but to do it downtown,” he said. “We looked to the established restaurants as inspiration when we first started as our model or example of how we should do things, but we wanted to be louder and looser and grew more comfortable adjusting and changing. Now that we have four stars, we have a platform. We can make our own rules. We don’t have to look to anyone else on how to do things and are more comfortable recognizing that what we think is right will be right for the guests and our team.” Intrinsically understanding the need to adapt with the age, the restaurant doesn’t have a rack of ill-fitting blazers and ties for guests to don if they slip up on their attire; that’s because there’s no dress code at the restaurant. If you can afford $295 per guest for an exquisite, contemporary American, eight to ten-course meal served over three hours, you can still sport your Dussault jeans.

Eleven Madison Park’s mission is a simple yet Sisyphean one: to be the most delicious and most gracious restaurant in the world. Laughingly, Peelle noted that the restaurant won’t have to change that mission statement for some time. “We talk about this every day. If you want it to come true, you have to say it. It’s not at all to be controversial. You need to state the goal. There’s all this energy, and you don’t want to give it up.” All this might seem like a lot of pressure, but with Peelle’s steady intensity and deep intelligence, it’s clearly an achievable goal.

Peelle explained his career trajectory. “Since I was 10 I knew that I wanted to work in hotels, but I didn’t know what that meant,” he said. While at the University of Pennsylvania, Peelle studied art history and political science. After graduating, he worked at the Ritz Carlton in Philadelphia and realized that he was not attracted to the senior-level positions in the hotel business. An interest in “eating” and a conversation with Max’s Restaurant Group owner Rich Rosenthal P ’09, ’11, ‘12 led Peelle to attend culinary school in New York City by day and work in a kitchen at night. Peelle met with Guidara and Humm in 2008, and he has worked at the Make It Nice restaurant group, including stints at Eleven Madison Park’s more casual sister restaurant, NoMad, ever since. Like many restaurants, Eleven Madison Park faced an existential crisis in 2008 when the long shadow of the financial collapse saw many bulwark institutions such as Tavern on the Green and the Rainbow Room shutter. Several nights during the week, Eleven Madison Park curtained off a section of the room because they couldn’t fill the seats. Fortunately, the success of Meyer’s Shake Shack buoyed Eleven Madison Park financially to gird the tough times.

With the No. 1 ranking comes the burden of sustaining a level of excellence day in and day out. The menu changes four times a year, with testing beginning in January or February for the fall season. At times, it can take as long as a year to get the menu right because every dish is tweaked eight to nine times. Food is sourced locally within 250 miles of the restaurant, but more important, Peelle said, is that the food needs to tell a story, be delicious and inspired and make sense. At one point several years ago, the meals featured an array of ingredients, but now the dishes may feature one or two exceptional ingredients, such as a braised celery root ball intricately executed tableside in a pig’s bladder with celery root and black truffle puree. Contrast that to the 2009 The New York Times four-star review, which praised the poached prawns with creme fraiche, green apple, lime, and avocado or the technique driven turbot with zucchini and squash blossoms. Clearly, the restraint in ingredients has not dampened the dining experience and displays a deeper confidence in Humm’s technique.

Walking into the white-tiled kitchen as immaculate as a surgeon’s operating room, the team is met with an eleven-word credo on the wall inspired by the improvisational musical styling of Miles Davis: cool, collaborative, vibrant, adventurous, forward-moving, endless reinvention. Peelle explained, “We want to be perfect, but there’s going to be mistakes. It’s an opportunity to get better every day. Every day there’s always something different.” Clocking in 12-hour plus days, Peelle admitted that this lifestyle is not for everyone. “We work people very hard, but I need the team to have this sense that they love what they’re doing. There’s almost a little selfishness about it.” The act of creating an exceptional dining experience is for the team, in fact, an energizing and fulfilling one. Contrary to the histrionics captured on television restaurant shows, the team’s values coalesce around pride, responsibility, and care. “If something goes wrong, that means that I didn't set them up for success,” Peelle said. The culture and morale of the team are all important, and Peelle takes the group’s temperature every day to make sure things are on track. During the daily line up, employees are routinely singled out for ‘crushing it.’ “You need to praise as much as you critique, and we need to praise more,” he said. Peelle believes his staff operates best when they are empowered to do their job. “The main servers run the show,” he said. “They have complete authority and control. I tell them, “Whatever you think we should do, then do it.”

Following their own standard of “endless reinvention”, Eleven Madison Park, will close for the summer, gut the kitchen, revamp the interior and, within one week of the start of demolition, open a pop-up restaurant for the summer in East Hampton. Team members will be roomed in local houses and work in the East End eatery until the Manhattan renovation is complete until Labor Day. Upcoming plans also include an expansion of their NoMad restaurant in Las Vegas and Los Angeles. A stand-alone restaurant is planned at 425 Park Avenue in Manhattan at a later date.

With Peelle and his high-performing team’s shared purpose, this quintessential New York establishment will continue to be the world’s finest restaurant. And, if you can’t get a table, there’s a food truck selling donuts and coffee just steps from the front door. As they say, only in New York, kids.
Back