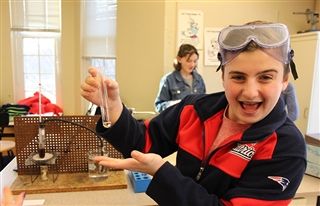 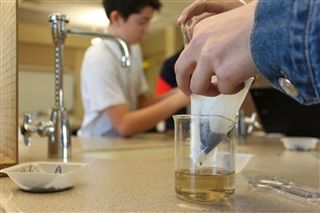 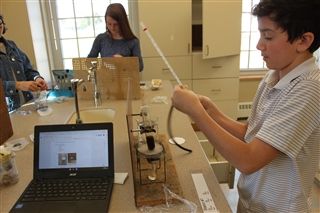 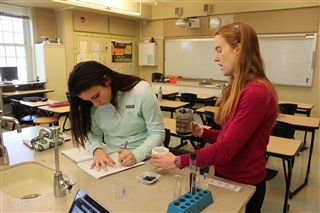 Mixing It Up in Intro to Physical Science

12/11/2018
Katherine Gianni
On Thursday, December 7, a group of enthusiastic Introductory Physical Science, or IPS students, got their hands dirty…literally. Under the watchful eye of IPS teacher Josh Garrison, the eighth graders embarked on day three of their six-day sludge test—a multitiered, experiment that asked the young scientists to separate an unknown mixture of sludge into its various components and identify each substance through their unique, characteristic properties.

Equipped with their pre-lab assignments, goggles, and observation notebooks, the class got to work. Pairs of lab partners laid out their materials: glass beakers and test tubes, matches, thermometers, and of course, the slimy blue sludge. Separating the liquid from the solid substances required two different processes. For the solids, the students ladled a glob of sludge onto a piece of filtration paper covering a large beaker. They proceeded to pour water over the glob, and watched closely as bits of insoluble material dripped down into the glass. Many students were sure that sand was at least one of the solid substances, their pens flying across the lined pages of their notebooks to track their impressions. Others, like Alex Arnold, offered up guesses like bark and woodchips. “We know that the sand with sink to the bottom of the beaker while other, lighter materials will rise,” explained Arnold ’23.

For the liquids, the students were tasked to fractionally distill the mixture in an attempt to further identify each material. The lab partners worked in tandem, each expertly setting up their glassware and apparatuses including a test tube containing the mystery liquid, a flat-bottomed beaker, a condensing tube, and a glass thermometer.
“Right now we’re working to find the boiling point,” said Pierce Flynn ’23. His lab partner, Ben Stengel  ’23 struck a match, igniting the wick the would heat the bottom of the beaker containing a bath of water and the test tube of unidentified liquid.

“As the liquid reaches its boiling point it will begin to evaporate through the condensing tube and into this other beaker,” Flynn explained, pointing to the glass on the opposite side of the setup.

The students studied closely as the thermometer climbed in degrees. 50, 60, 70, 75…As the distilling process ticked on, new guesses and observations were made. Stengel deduced that the new liquid was ethyl alcohol based on its 78 degree boiling point. Other students concurred, adding that the strong, nail polish remover smell tipped them off. Next week, the young scientists will trade in their lab coats and goggles for reporters notepads and magnifying glasses, as they continue to identify one substance from another.

“There’s a lot of different ways to figure out what everything is,” said Flynn. “There’s smell, obviously, but we can also test for things like flammability, density, and solubility.”

With seven different materials to uncover, the class still has a fair share of work to do, but they voiced a collective excitement at the prospect of finally discovering what really shapes the sludge. “I just think it’s really cool that we can separate and identify these materials through doing relatively simple things like boiling,” said Flynn. “Uncovering these types of things is the best part.”

Intro to Physical Science is a lab-centric course that fosters hands-on learning and student ownership of a project. The class focuses on the development of lab skills and scientific reasoning to provide a solid foundation for more advanced STEM investigations.