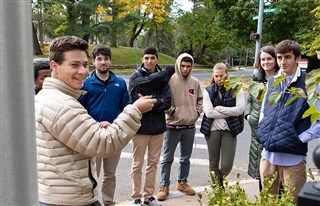 Following in a Poet's Footsteps

10/24/2018
Asylum Road in Hartford is not as likely a source of inspiration as say, Lord Byron’s Italy or Greece, but for longtime Hartford resident, the Pulitzer Prize-winning poet and insurance executive, Wallace Stevens, the street and its surroundings moved him to write “Thirteen Ways of Looking at a Blackbird”. Mela Frye’s Senior Poetry class, ambled along Steven’s route to work at The Hartford at 690 Asylum Road to his house on Westerly Terrace and quoted the poem at the granite markers inscribed with each stanza along the way.
In a letter, Wallace Stevens said of "Thirteen Ways of Looking at a Blackbird," "This group of poems is not meant to be a collection of epigrams or of ideas, but of sensations." The poem is spare and its structure functions like independent aphorisms or haiku-like poems. During the 2.4 mile walk that includes the Asylum Hill Congregational Church, the Hartford Conservatory and the Hartford Classical Magnet School, Frye asked the students to consider the placement of the marker and its significance with the poem. Were they intentionally placed by the Friends and Enemies of Wallace Stevens organization whose donations made the walk possible? After the student read his or her given stanza, they spoke thoughtfully about the possible interpretations of this highly inscrutable work. As the students walked Wallace’s path, Frye challenged them to spontaneously create a poem about a statue of two painted cows that they passed along the way.

"Nevertheless, I found the walk to be deeply moving. After all, how often do we get to explore the cranial machinery of a literary titan by slipping into the groove of his daily commute?

Stevens never learned to drive. Even though many of his neighbors had no idea what he was up to, he would amble along Asylum Avenue methodically measuring the pace of his steps and murmuring phrases to himself — phrases that would become some of the most haunting lines in the English language.

“It seems as though Stevens composed poems in his head, and then wrote them down, often after he arrived at the office,” Prof. Helen Vendler, Harvard’s grande dame of poetry and the author of “Wallace Stevens: Words Chosen Out of Desire,” explained to me in an e-mail. “As for his commute, he enjoyed it profoundly. It was his only time out of doors, alone, thinking, receptive to the influx of nature into all the senses.”"
Students in the English 6 Fall Elective: Poetry: Keats to Kanye read one poet per week and examine what makes a poem a poem. The poets covered in the class include Keats, Walt Whitman, Emily Dickenson, William Butler Yeats, Robert Frost, Wallace Stevens, Elizabeth Bishop, Gwendolyn Brooks, Terrance Hayes. Prior to Symposium author Colson Whitehead's visit in December, the class will read his collection of essays The Colossus of New York. Lastly, the students study contemporary song lyrics and rap lyrics by artists such as J. Cole, Eminem, and Tyler the Creator. The end of the semester is capped by a student-designed creative project.
Thirteen Ways of Looking at a Blackbird
Wallace Stevens

I
Among twenty snowy mountains,
The only moving thing
Was the eye of the blackbird.
II
I was of three minds,
Like a tree
In which there are three blackbirds.
III
The blackbird whirled in the autumn winds.
It was a small part of the pantomime.
IV
A man and a woman
Are one.
A man and a woman and a blackbird
Are one.
V
I do not know which to prefer,
The beauty of inflections
Or the beauty of innuendoes,
The blackbird whistling
Or just after.
VI
Icicles filled the long window
With barbaric glass.
The shadow of the blackbird
Crossed it, to and fro.
The mood
Traced in the shadow
An indecipherable cause.
VII
O thin men of Haddam,
Why do you imagine golden birds?
Do you not see how the blackbird
Walks around the feet
Of the women about you?
VIII
I know noble accents
And lucid, inescapable rhythms;
But I know, too,
That the blackbird is involved
In what I know.
IX
When the blackbird flew out of sight,
It marked the edge
Of one of many circles.
X
At the sight of blackbirds
Flying in a green light,
Even the bawds of euphony
Would cry out sharply.
XI
He rode over Connecticut
In a glass coach.
Once, a fear pierced him,
In that he mistook
The shadow of his equipage
For blackbirds.
XII
The river is moving.
The blackbird must be flying.
XIII
It was evening all afternoon.
It was snowing
And it was going to snow.
The blackbird sat
In the cedar-limbs.
Back