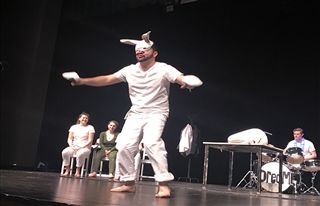 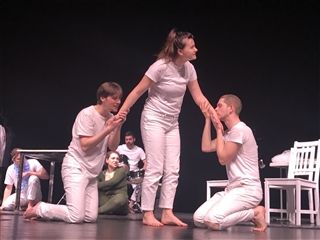 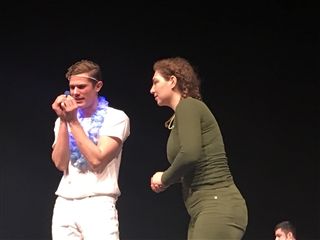 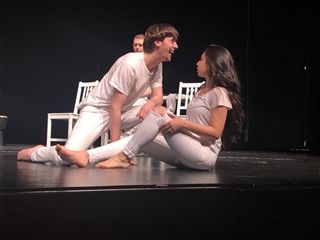 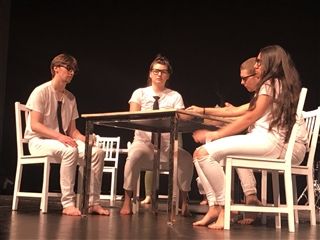 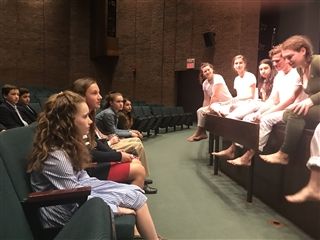 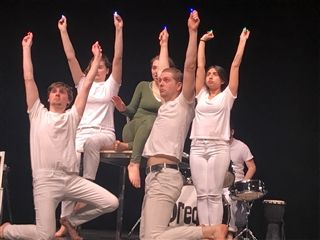 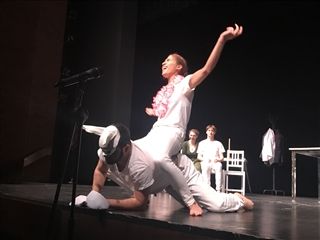 4/9/2019
Classic Repertory Company (CRC), the New Reps educational outreach program, performed one of William Shakespeare’s most delightful comedies, A Midsummer Night's Dream through the school’s Goodman Banks Series. Despite the florid language, multiple plot lines, mistaken identities and the actors playing multiple characters, the performance enthralled the students, especially in the Middle School, who boisterously laughed
as the hilarity ensued in the dreamy woodland copse to the point that even the actors giggled onstage.
The set and costumes were spare (all characters with the exception of the mischievous Puck in white t-shirts and white jeans), not only allowing Shakespeare's language to shine but for the actors to don glasses, ties, and other props to convey a character change. The play interspersed music throughout, a drum, bongo, kazoo, and flute to help propel the story forward and delineate characters. The acting company compressed the three-hour play into 90 minutes without disrupting the lighthearted plotline or integrity of the play’s spirit.
Following the performance, the troupe discussed the acting process with a class of Middle School students. They shared that they rehearsed the play in September over the course of one month, beginning with a table read. The actors admitted that Shakespeare’s language is even difficult for them to master, and in many cases, they needed to research what a line meant before they could deliver it to the audience. One actress, who portrayed Puck, said that in one of her lines where the character describes the evening sky as a dragon eating clouds "For night's swift dragons cut the clouds full fast", she actually pictures the images of what she is speaking in order to understand the context. In many cases, the actors consulted a Shakespearean dictionary to comprehend the meaning of words. One actor said, “Shakespeare is still relevant. There’s constantly more to find in his work like the many references of his times that he uses. It’s like putting a puzzle together.”
A Midsummer Night’s Dream was presented through the Goodman Banks Series. Students experience the creative process firsthand as they work with visual and performing artists from around the world. Through performances and master classes, artists share their techniques, processes, and creations with Middle and Upper School students who come to know life through the eyes of working artists.
Back