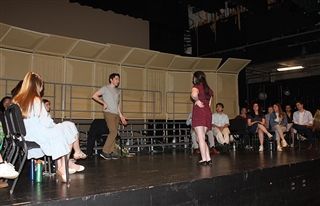 5/1/2019
There was no shortage of chutzpah as eleven KO theater students performed an individual number while Broadway actor, Ben Fankhauser, critiqued and tweaked their work in a recent master class arranged by Director of Theater Kyle Reynolds last Monday night. Fankhauser assessed the students thoughtfully and constructively, compelling them to venture into new areas of physicality and emotion.

In the case of Kate Brough ’19, who performed “When It All Falls Down”, a song in which a newsperson wants to exact revenge on a hard-to-pin-down, elusive Charlie Chaplin, Fankhauser asked Brough to consider her audience and reflect on her version of the song. “How do I physically express the story I want to tell? What do I want to get across to allow the audience to feel those emotions? There’s no wrong answer,” Fankhauser stressed. By articulating her feelings about revenge, Brough was able to incorporate various mid-range gestures into the song and step away from using her familiar hand-on-hip stance. For another iteration of the song, Frankhauser pressed Brough to whisper the song into the ear of a fellow actor so she could not rely on her volume or tone. Brough took a great stride forward in finding the truth of the song by using these devices.

After Matthew Marottolo ’20 sang his smoky “Feeling Good,” he told Fankhauser that he always tries to give everything in a song which leaves him tired after the performance. Fankhauser said that pop songs require the singer to create energy for the room, but in musical theater, actors need to keep the momentum throughout the play. So that Martolo could explore different physical moves in the song, Fankhauser asked Marottolo to reverse the roles of his arms and legs: if your instinct is to walk forward use a hand gesture; if you want to use an arm motion, move your legs instead. By switching and varying his motions, Marottolo gained a greater awareness of his impulse and his body in space. To drive home the high point the song, Marottolo drew on his personal experience of a squash victory to amplify his voice and emotion. “Give yourselves a task in a song when you’re not certain of how it’s going to go. It’s scary,” Fankhauser admitted. “We have to be brave to get up there and sing.”

“Fly Into the Future” from the play Vanities saw Remy McCoy ’20 solidly deliver the song, which involved a person wanting to break free of her family’s restrictions and demands. Fankhauser asked McCoy to use three expressive gestures that denoted freedom and to integrate those shapes within the song. After following Fankhauser’s instructions, he asked McCoy to reflect how it felt trying on these new forms. “It wasn’t artificial at all. I felt really connected to the song,” McCoy said. In another variation, Fankhauser had McCoy sit while singing to emote more vocally.

“My best acting advice to you,” Fankhauser said, “is to give you permission to not have to fill every moment of the song with something interesting. Sometimes just standing in your greatness is enough.”

Ben Fankhauser's Broadway credits include (Newsies, Original Broadway Cast), National Tours: Spring Awakening, Beautiful - The Carole King Musical. Television/Film: The Deuce, Twenty Something, It Could Be Worse, and Submissions Only. Fankhauser originated the role of Davey in Newsies at Paper Mill Playhouse before bringing the show to Broadway. He is a graduate of Ithaca College where he received his BFA in Musical Theater. Ben is currently playing the role of Steve in The Flamingo Kid at Hartford Stage.
Back