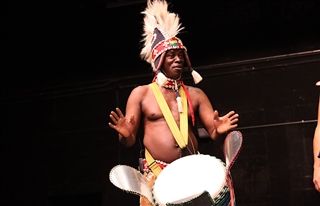 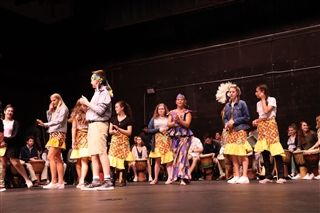 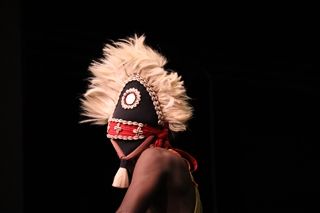 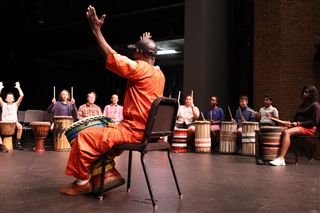 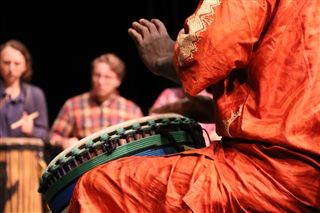 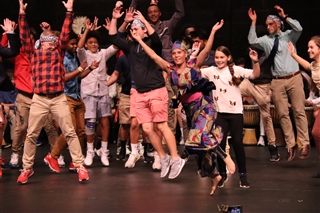 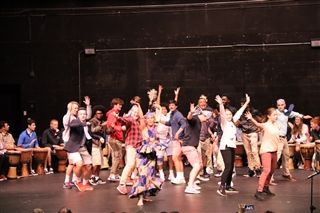 Born in Guinea, Bolokada began drumming at the age of two. Due to his passion and commitment, his mother brought him to the main city near his village so he could watch the masters’ performances and learn their techniques. By his dynamic playing and enthusiastic spirit, Bolokando became the lead drummer for the Les Percussions de Guinee and is considered one of the world’s foremost djembefolas. He has visited over 74 countries, sharing his love and practice of his art which connects people across borders.

An integral part of African culture, traditional African music plays an important role in the way people interact, celebrate and pass on historic events. Bolokada taught the Cantabile choir, Upper School choir, and Upper School jazz ensemble the song "Domabale." Steve Mitchell, KO’s choral director said that “Domabale” “refers to a specific rhythm and the family from which it originated. It basically speaks of the joy of the music and the honor of the family.” There was a participatory nature to the song where Conde would sing and the chorus would respond to his words, forming a beautiful connection between the students and the artist.

The students also learned to play the djembe, the rope-tuned skin-covered drum created 400-800 years ago by the Mande people. The name originates from Mali which means: everyone gathers together in peace. According to Drum Connection based in Boston, “to play djembe means to stay true to the history of the djembe; That includes the traditions of magic, knowledge and an open heart.”

The djembe is played with the hands and depending on where and how you strike the drum, the drummer can achieve different sounds. By hitting the drum in the middle with a heavy hand, the sound is low. To achieve a medium pitch, the drummer plays towards the edge of the skin of the drum. Over two dozen various size drums some painted with the traditional tricolor of Africa and others painted in vibrant yellows ringed the Roberts Theater stage where the students literally had hands-on experience with djembe playing.

His residency culminated in what will arguably be the most legendary assembly that quickened the pulse at KO. Wearing a special headdress with a mohawk style of reeds, grasses and decorative embellishments of shells that is specifically made for the djembe drummer, Bolokada led the entire school in an exhaustive performance. He cried exuberantly to the crowd, “Do you want to play?” At breakneck speed, the middle school students rushed to the stage to take their seats behind the drums. A dancer led the students in a traditional African dance. The Upper School students had their turn performing for the audience, and the teachers took turns playing the djembe while other faculty members danced with abandon.

After the assembly, the students asked questions of Bolokada’s artistry. One student asked him if his hands ever hurt from playing. With an ear to ear grin, Bolokada responded that is hands never hurt because his hands are ready and his muscles are ready. Once he feels the energy of the crowd, he is exhilarated.

Bolokada said, “My goal is to make people happy.”