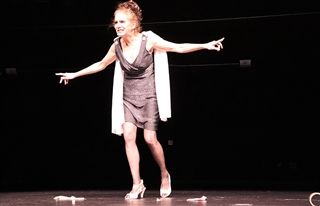 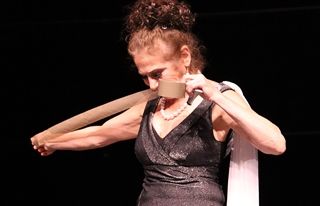 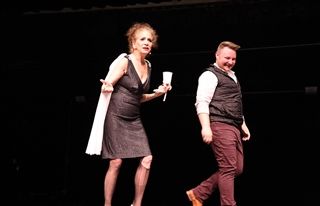 Break a Leg, Or In This Case, A Heel

Chaplain stepped out on stage in a cocktail dress, heels, and a scarf, and began dramatically performing a monologue as the character of Portia. Shortly thereafter, she tripped and broke a heel off her shoe. Seemingly shocked, she was rescued by Director of Theater Kyle Reynolds who waited in the wings with packing tape. But, with no scissors to cut an appropriate size piece, what ensued was a very laborious and hilarious attempt to secure it back on. Unbeknown to her audience, the broken heel shtick was actually all staged. The crowd caught on after a downhill battle where "Portia" secured the shoe but broke the string of pearls around her neck. When she attempted to superglue the heel (which had fallen off again), she ended up gluing her hands, her stockings, her hair...anything but the shoe.

Chaplain excels at this type of physical comedy. She can captivate an audience and have them doubled over with laughter. Chaplain has a litany of accolades and experience in many facets of theater including Shakespeare plays, children's theater, clown work, and physical comedy. She draws inspiration from clown theatre, movement, objects and puppetry, mime training, and entertaining children in NYC hospitals as “Nurse Nice” of the renowned Big Apple Circus Hospital Clown Program®. She is also a founding member of the New York Goofs, a clown ensemble created in 1996.

Chaplain grew up in New Hampshire and at age 10, her mother brought her to an audition for a performance called The Three Little Mermaids. She got the part of the third mermaid and after that, she was hooked. “At that time I decided I am going to be an actress, and I never changed my mind.”

Chaplain takes a brave approach when auditioning in front of agents, managers, and casting directors for more serious type roles. Instead of doing what all the other actors would and in traditional clothing to fit a particular role, Chaplain inserts the physical “accidents” of comedy alongside the piece itself. While unconventional, her approach got the casting directors' attention and won her parts.

She admits she rarely performs in schools but due to the lasting impression that Reynolds left on her, she agreed to make the trip to Kingswood Oxford. Students had a chance to ask her questions, and she even let them in on some trade secrets like how her necklace broke on cue.

Since 2005, Chaplain has been touring internationally with her award-winning solo show A Life in Her Day. In 2018 she created a show in collaboration with other artists called The Last Rat of Theresienstadt, which won the top four awards when it premiered at the Lalka Tez Cztowiek Puppet Festival in Warsaw, Poland. She was an original cast member in Bill Irwin’s Largely/New York and appeared on Broadway in the Public Theatre production of The Tempest, directed by George C. Wolfe. She played a featured role in Forrest Gump, and a lawyer on Law and Order Criminal Intent. She has performed and taught worldwide in over 20 countries and five continents.
Back