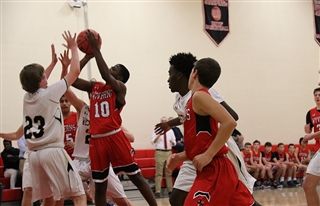 The Varsity Girls’ Basketball started off with a big win on the road against Taft 34-30. Right from the tip, the Wyverns took the lead by hitting four 3’s in the first quarter and held Taft to only three points. KO continued to pressure their opponent on the defensive end and collected 11 offensive rebounds which helped secure their first win of the season. Angelina Maselli ’20 was the leading scorer with 14 points and Emily Knowles ’25 contributed seven points. Audrey Decker ‘20, Natalia Correa ’22 each added four points along with Molly Jones ’20 and Jordan Dimauro ‘23 adding three points and two points, respectively. This was a great team win for the Lady Wyverns.

In its season, the JV Girls’ Basketball team won 43-17 against Taft Red Rhinos on Dec. 5.  This was a game of two halves as the teams were back and forth in the first half with KO up by just a point at halftime. With some halftime adjustments, the Wyverns played a hustling pressure defense that limited Taft to four second half points. Co-captains Juanita Asapokai '20 and Julia Kanaan '20 set the tone early on with their poised and spirited play. Hailey Williams '23 and Caroline Dawson '22 were high scorers with 14 and 11 points, respectively. Keegan McMahon '21 was the team's leading rebounder for the game, working hard under the boards at both ends of the court.

The Varsity Boys’ Basketball team defeated Westminster 67-41 in a strong team performance on December 6. After enjoying a small advantage at the halftime break, the Wyverns went on a great run to start the second half to establish a comfortable lead. The team then slowly built upon this advantage with solid play. The team was led by Hunter Meshanic '21 (22 pts 10 rebounds), Carter Meshanic '21 (16 pts 14 rebounds), and Gavin Griffiths (15 pts, 6 rebounds, 6 assists). Mike DeMio '21 provided a key spark off the bench with his passionate play. It was a good collective effort and a fantastic home crowd.

The JV Girls’ Basketball team lost 27-34 against Loomis Chaffee on December 7. Down by five at halftime, the team worked its way back into the game through effective defense including many defensive rebounds that led to crucial transition points. They took full advantage of the foul shot opportunities; the team shot 80% from the free throw line, all taken in the second half. Leading scorers for the team included Hailey Williams '23, Caroline Dawson '22, and Emma Henry '21. Brie Toedt '21 contributed a key three pointer down the stretch to keep the game close.

The Varsity Girls’ Basketball team lost 55-60 in overtime against Williston Northampton on December 8. This was the Wyverns first home game of the season, and it was a nail biter. KO came out aggressive taking the lead right away hitting two three pointers. Throughout the game both teams battled each other which ended up going into overtime. The Wyverns fought hard to hold on but couldn’t and lost by only five points in OT. Offensively, KO was lead by Angelina Maselli ’20 with 22 points and Natalia Correa ’22 who added nine points. Other Wyverns who contributed were Molly Jones ’20 with seven points, Audrey Decker ’20 with five points, Lindsay Bailey ’22 with four points, Emily Knowles ’25 with four points, and Kameryn Perry ’23 with two points.

The Varsity Boys’ Basketball team defeated Avon Old Farms in a solid team victory 58-49 on December 11. The Wyverns were led by Jackson Wolff '20 (18 pts 5 rebounds), Gavin Griffiths '23 (18 pts 14 rebounds), and Carter Meshanic '21 (16 pts 7 rebounds). Hunter Meshanic '21 was also a key contributed with strong interior defense and a fantastic commitment to rebounding. The team is very excited to continue to work hard with the KITs starting on Friday.

In its first game of the season, the KO MS Girls' A Basketball team beat Ethel Walker 41-19 on December 11. After a challenging first half, leading by only six points, the Wyverns were able to pull away towards the end for a comfortable victory. The team can credit its tenacious defense and fast break offense for its ability to come away with a win. Georgia Louis ’24 started the season off right with a team-high 24 points. Lia Arnold ’25 scored nine points and was a force on the boards, pulling down some key rebounds. Niamh Foley ’25 also did a nice job leading the offense, and she ended the game with four points. Both returning players and newcomers showed that they are ready to play hard and play good team basketball. All in all, this was a great first game, as the Wyverns hope to improve and build momentum for the season ahead.

The JV Girls' Basketball team won against Bershire 38-19 on December 11. The Wyverns took the lead of the game after winning the opening tap with a quick three pointer from Caroline Dawson '22 and never relinquished it. Berkshire did make a run early on in the second half, yet after a defensive adjustment and stellar team and individual defense led by Keegan McMahon '21 and Ellen Jacobson '23, the Wyverns extended their lead. Dawson finished as high scorer with 17 points while Hailey Williams '23 (nine points), Emma Henry '21 (eight points), and Juanita Asapokai '20 (four points) also scored.

The Varsity Girls’ Squash team competed in a WALKS play day on December 4 against the Westminster Martlets, Suffield Tigers, Loomis Chaffee Pelicans. The result were as follows: KO lost to Westminster 5-2, beat Suffield 4-3 and beat Loomis 4-3. After a week of Thanksgiving rest and a few snow days, the Wyverns dove headfirst into a busy day of scrimmages to start off the season. Each player showed improvement from match to match, made adjustments and considered what remains for us to work on. Amelia Levine '20 had a thrilling match against her no. 3 counterpart from Westminster in which she took the first game in extra points (15-13) and held on to win in the third with a powerful serve and careful shot selection. Sydney Smith '21, Izzy Berckemeyer '21, Mai Lin Pomp-Shine '20, Amrita Natarajan '22, and Shreeya Chalikonda '21 all came away with two wins for the day to solidify the team's success. Mackenzie Caruso '22, in her debut varsity match, won with a deciding third game that brought a strong finish to the day.

The Varsity Girls’ Squash team won 6-1 against Ethel Walker on December 7. While the team was missing some players in their lineup going into this match, the Wyverns were ready to step it up and play in positions on the ladder that were unfamiliar to them. Five out of seven matches were 3-0 sweeps for our players, with particularly clinical and determined performances from co-captain Izzy Berckemeyer '21 in the no. 1 spot, Ely Alleyne '23 in the no. 4 spot, Amrita Natarajan '22 in the no. 5 spot, and Macy Isenberg '22, celebrating a decisive first varsity squash win, in the no. 7 spot. Amelia Levine '20 and Sloan Duvall '21 both had tough first games where they made key adjustments to elevate their matchplay and take their matches 3-0 and 3-1, respectively. Mackenzie Caruso '22 had a riveting back-and-forth battle in the no. 6 spot, coming back from being down one game and taking the match to five games in a clear show of grit. We look forward to our last match of 2019 on Wednesday against Suffield!

The Varsity Boys’ Swimming and Diving lost 78-100 against the Hopkins Hilltoppers on December 4. Despite the extended Thanksgiving break and subsequent snow days, energy was high and the Wyverns swam with speed and determination. While the Hilltoppers put up some fast times, the Wyverns remained tenacious and had some impressive swims as well. It was fantastic seeing novice swimmers and freshman swimming their first races as Wyverns! Nick Traver ‘20 finished second in the 200 yd free with a time of 2:00.38; Ben Zamstein ‘20 and Jamie Amell ‘20 also finished second in the 100 yd. butterfly (59.09) and 100 yd. breaststroke (1:07.2) respectively. Marrich Somridhivej ‘22 swam a noteworthy 24.6 in the 50 yd. freestyle, while diver Eli Brandt ‘22 took home a first place finish in diving earning 204.7 points.

The Varsity Girls’ Swimming & Diving team swam to their first victory on December 7, with a score of 57-34 over Wilbraham & Monson Academy. Allie Wildstein ‘22 earned first place in both the 500 Free and the 100 Backstroke. Maggie Dwyer ‘23 earned 1st place in the 50 Free and second place in the 100 Backstroke. Stella Risinger ‘22 earned second place in the 100 IM and 100 Fly. Cai Kuivila ‘20 earned second place in the 200 Free and 100 Free. Risha Ranjan '21 earned 1st place in the 200 Free and 3rd in the 100 Fly. In an exceptional and exciting swim, Serafina Squatrito ‘22 earned first place in the 100 free with a personal best time of 1:06.13. The 200 Medley Relay team of Allie Wildstein ‘22, Hannah Krause ‘23, Stella Risinger ‘22 and Serafina Squatrito ‘22 earned 2nd place. Finally, the 200 Free Relay team of Risha Ranjan ‘21, Hannah Krause ‘23, Serafina Squatrito ‘22 and Cai Kuivila ‘20 and the 400 Free Relay team of Risha Ranjan ‘21, Stella Risinger ‘22, Maggie Dwyer ‘23 and Allie Wildstein ‘22 both earned 1st place finishes. The girls look forward to a week of training before facing Canterbury, Ethel Walker, Williston Northampton, Westminster, and Wilbraham & Monson in the Kingswood Oxford Invitational this upcoming weekend.
Back