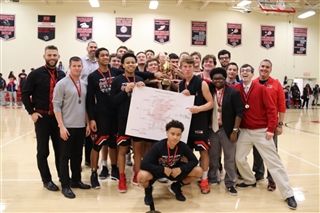 The Varsity Girls’ Basketball team lost 31-39 against Berkshire on Dec. 11. The team started off strong in the first half hitting five three’s and going 100 percent from the free-throw line to have a nine-point lead at half time. But, Berkshire came out with their full-court press. The Wyverns battled to keep the lead but came up short when the final buzzer went off. On the offensive end, Kameryn Perry ’23 led with nine points which were all three-pointers. Other Wyverns who contributed points included  Audrey Decker ’20 eight points, Angelina Maselli ‘20 with seven points, Jordan Dimauro ’23 three points and Molly Jones ’20 and Natalia Correa ’22 each added a two! Emily Knowles ’25 and Lindsay Bailey ’22 put forth a great defensive effort.

The Varsity Girls’ Basketball team won 60-10 against Capital Prep on Dec. 13. On the opening day of the Paul W. “Frosty” Francis Kingswood Oxford Invitational Basketball Tournament, the Wyverns came out hot and ready to play. Overall, it was a great team effort throughout the whole game, and all players contributed in some way to make it memorable. Angelina Maselli ‘20 led the way with 10 points, followed by Kameryn Perry’ 23 and Emily Knowles ’25 who had nine points. Others who help carry KO to victory were Natalia Correa ’22 seven points, Audrey Decker ‘20 six points, Quinn Kearney ‘23 five points, Kathryn Westrick ’20 four points, Molly Jones ’20 and Kyra Dunnirvine ’23 with three points each. Lindsay Bailey ’22 and Jordan Dimauro ’23 added two points respectively.

The Varsity Boys’ Basketball team defeated Kents Hills 83-50 in the quarterfinals of the 2019 KIT tournament. The team greatly enjoyed the wonderful atmosphere created by the KO student body. The Wyverns were led offensively by senior captain, Jackson Wolff ‘20 (24 pts), Hunter Meshanic ‘21 (19 pts), and Gavin Griffiths ‘23 (12 pts). The team was led in rebounds by Carter Meshanic ‘21 (12 rebounds).

The Varsity Boys’ Basketball team defeated Hopkins 71-47 in the semifinals of the 2019 KITs. The team played strong, selfless basketball throughout the first half establishing a good lead at the half. The team maintained this advantage throughout the remainder of the game. The Wyverns were led offensively by Hunter Meshanic ‘21 (17 pts, six rebounds), Gavin Griffiths ‘23 (12 pts, five rebounds), and Jackson Wolff ‘20 (10 points, four rebounds). The team was led in rebounds by Carter Meshanic ‘21 (nine rebounds).

The Varsity Boys’ Basketball team defeated a strong Storm King team 75-58 to win the KIT tournament, led by Gavin Griffith's '23 31 point effort. It was a wonderful culmination of a great team effort throughout the three-day tournament. Carter Meshanic ‘21 had another outstanding game (17 pts, 13 rebounds) not only statistically but in terms of leadership and selfless play. Hunter Meshanic ‘21 contributed 11 pts and good defense despite battling flu-like conditions. Jackson Wolff ‘20 added 11 pts and was awarded the tournament's Most Outstanding Player award for his fantastic three-game effort. Ben Merritt ‘21, Jordon Walker ‘20, and Calvin Schumacher ‘20 were key players for the Wyverns on both sides of the ball.

The Varsity Girls Squash team won 7-0 against Suffield on Dec. 11. Back into the groove and with our full team ready to play this time, the Wyverns brought a strong, consistent performance to our first home match of the season. Co-captain Sydney Smith '21 held on in her nailbiter first game for a 17-15 win and then maintained her resolve to take the overall match 3-1 in the no. 1 spot. The rest of our lineup had 3-0 victories. In particular, Ely Alleyne ‘23, Amrita Natarajan '22, and Shreeya Chalikonda ‘21 dug deep to hold on in extra-point games to clinch clean sweeps in their matches. It was a promising showing for our final match of 2019, and we look forward to taking on Millbrook when we return in the New Year!
Back