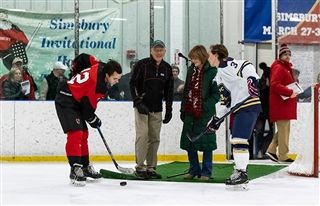 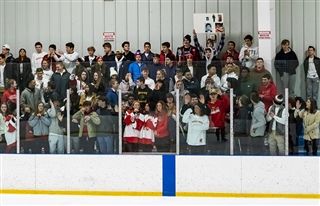 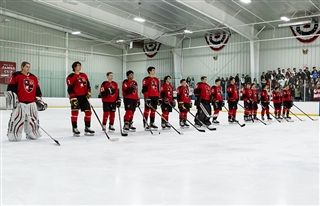 1/16/2020
Kingswood Oxford hosted the King School this past Friday night at The International Skating Center of CT to Celebrate KO’s Ryan Gordon Hockey night. Despite the loss, the Wyverns illustrated a true team effort, playing hard and fighting to the end in front of a packed rink of cheering fans, family and friends. Shane Dawson ’20 led the way for Kingswood, scoring both goals. John McLaughlin ‘20 had 30 saves on 34 shots for the Wyverns between the pipes. Karstian Lang ’20, Will Elliott ’21, and Mitchell Autorino '21 all logged assists in the game.

The entire night was filled with an upbeat spirit. KO students donned their hockey night t-shirts; the crowd participated in games like chuck the puck; eager fans displayed their own skating skills at a free skate after the game.

Proceeds from the entire event went to Team Tobati, a community service opportunity at Kingswood Oxford. Each March, students travel to Tobatí, Paraguay, where they volunteer on projects that benefit area youth. The Gordon family was instrumental in the planning and execution of the annual hockey night event which explained why there was such a wonderful vibe that wove its way throughout the evening.

Ryan Gordon ‘05 passed away in 2006, but he is still making a profound impact on the KO community. While his medical condition often prevented him from participating in sports, hockey was one of his greatest passions and through encouragement by his teachers, he managed the hockey team during his time at KO. One of Ryan’s final wishes was to give part of his college fund to KO. As a result, many students have traveled to Tobati, Paraguay for the annual service trip. Hockey night continues to be a major fundraiser for the trip, providing assistance for those students that wouldn’t otherwise be able to afford the trip.

Ron Garcia, coordinator for Team Tobati said, “There’s no greater education than to experience another reality and a different way of life at this age. Ryan gave our kids a gift that he didn’t have himself.”

Ryan’s parents, Barry and Phyllis Gordon did the honorary puck drop at the start of the game, adding an extra sweet sentiment to the evening.