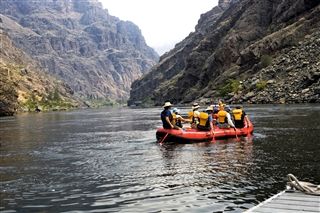 1/30/2020
After hearing about Esha Kataria’s ’20 experience as a recipient of the Perry S. Levy ’85 Outward Bound scholarship last year, Yusuf Rashid ’20 decided to apply for the chance to get closer to nature. “Camping is not something that I do. I like nature in general, but I really wanted to push myself. I saw it as an opportunity. Why not try something new?”
In his application essay, he reflected on a challenge that he faced -- learning to play lacrosse for the first time in high school. “I had never really played lacrosse but when I went to high school I joined the team and started playing every year. It was such a good experience for me, and I pushed through this discomfort. At the end of the day, I really enjoyed the sport and it paid off.
After obtaining the scholarship grant, Rashid researched various outdoor experiences including a dog sledding course in Alaska. “My mom shut that down really quickly. Since I didn’t have any camping experience, my mom thought that was pretty extreme,” he shared.
Instead, he chose to attend a one-week session at the Northwest School rafting along the Salmon and Snake River. “It was quite a hardcore camping experience for someone who has never done this before. You sleep under the stars and if it started to rain all you have is a little tarp to put over you. Everything you packed with you was in water sealed bags on the raft boat. It really limited what could bring. No hygiene stuff. They didn’t want us to bring extra clothing - only two shirts, but I snuck a few in," he said. The camp instructors banned technology which Rashid considered “refreshing.”
The group of 14 students from Utah, California and some local students woke up at 6:00 a.m. along the sandy shoreline of the rivers, ate breakfast and rafted for 15 to  20 miles in two rafts, hitting some tricky class three and four rapids. Although Rashid expressed he was nervous at first, he began to enjoy the wild ride and didn’t allow fear to get the best of him. The group would break for lunch and continue to raft for another seven miles where they would camp for the evening. The days included time to reflect and journal about how the day went and to reevaluate their expectations and goals.
A few highlights included cliff jumping despite an initial case of the nerves. “I was a little scared, but I was like 'Just do it. Nothing is going to happen.' You’ve got to try something new because you're not going to know if you like it. I overcame that fear. The second I jumped my stomach dropped and when I hit the water I was like 'Wow! That was fun' and I did it four times after that,” he said. Another lovely moment was floating with a buddy in the raft in the evening while looking up at the stars, laughing and sharing in a deep conversation.
“One of the things I learned from the experience is instead of just contemplating something just do it. At the end of the day, it’s not going to harm you. Take advantage of every opportunity. If you have an idea or a thought or a wish just go out and try to achieve it. It’s okay if it doesn’t happen but at least you tried,” Rashid said.
Rashid credits the Outward Bound experience for moving forward with his e-commerce business for novel and unique tech accessories.

“I had an idea in my mind that I wanted to start a little business. I’d been thinking about it for a while but after this trip, I had some inspiration and just went out to achieve it. Don’t be afraid, don’t hold back. Eventually, I was able to take what was in my mind and make it real. I attribute the risk-taking to this trip,” he said.
After working with Junior Achievement, Rashid had built up his knowledge of the supply chain. He contacted hundreds of manufacturers in China to produce tech accessories for a good price. The company ran for three months with a significant bump in sales after promoting the brand on social media. Currently, Rashid is reevaluating his marketing strategy. “It was successful, and I learned a lot.  I can replicate it to be more successful. This was an endeavor that was fun. You have to start somewhere."
Despite a jarring encounter with his face in the mirror after one week without proper hygiene, Rashid loved the experience. “I have a deeper appreciation of nature. I thought about the U.S. and these beautiful landmarks in our country that should be preserved. I would never have done this if I didn't get this experience, and I think that everyone should do this at least once in their lives.”

The Perry S. Levy Outward Bound Scholarship is an endowed fund that provides an annual grant for a Kingswood Oxford student to attend an Outward Bound program. The scholarship was established by Judie and Coleman B. Levy, their children – Dean ’87, Matthew ’89, and Evan ’93 – and Perry’s wife, Melissa Levy, in memory of Perry S. Levy ‘85, who passed away of cancer in October 1999.  In order to be considered for the opportunity, students are asked to submit an example of how they lived their life to the fullest, their inspiration for doing so, and their interest in Outward Bound.

At KO, Perry was awarded the Merritt Prize, which honors a senior “who best demonstrates the results of a Kingswood Oxford education.” In addition to succeeding as a student at KO, Perry earned varsity letters in football, wrestling, and baseball and was active in various student organizations.

The first grant was awarded in the spring of 2003.
Back