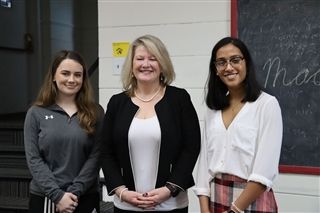 Head of Westfield Academy encourages students to create their own destiny

2/10/2020
On Friday, January 31, Ann Walsh Henderson P ’13 spoke in the Roberts Center for Leadership to an audience of students, parents, faculty, and staff. Henderson shared her experience as an attorney, assistant professor at UCONN Law, and now as the head of Westfield Academy.

Kingwood Oxford students Risha Ranjan ‘21, Sydney Dwyer ‘21, and Cai Kuivila ‘20 organized the visit with Henderson and Ranjan sat alongside her to ask questions.

Henderson is warm and approachable, striking an impressive balance as someone who could advise you on your resume and in the same minute grab a cup of coffee and lend a friendly ear.

Her compelling personal and educational journey often blended together in ways that inspired her to blaze her own unique trail. Her father immigrated from Ireland, and she and her four siblings grew up outside Chicago. The family eventually moved to Connecticut where she attended Notre Dame high school. Henderson mused that her mother often compared her to the actress in a Lipton ice tea commercial from the late 1980s, who jumped backward into a pool. Throughout her life, she always had a thirst for adventure and paved her own distinct path. She endearingly advocated the same for her audience.

“Seek out the advice of your parents, your teachers, your friends. But ultimately, know that you are in charge of your life. Some of the bad advice has taught me a lot. You are the architect of your own stories. Some of the people who might dissuade you from doing something you want to do are the same ones that will say ‘Wow, what a cool experience’ after,” she said.

In her junior year of high school and eager to take every opportunity she could, Henderson took her bicycle and went abroad to Paris. She ended up biking through the south of France and got offered a job running bike tours. That next summer, she toured people from around the world through castles and vineyards.

Henderson said, “ It was wonderful and life-changing. I encourage you to grab onto travel whenever you can.”

After she graduated from high school she went onto college at St. Michael’s in Vermont and majored in chemistry. As the first in her family to attend college, as well as a first-generation woman scientist, she threw herself into every opportunity college provided, while also getting involved in sports including swimming, cross-country, field hockey, lacrosse, running multiple marathons and trying her hand on the theater stage. She was awarded the Most Outstanding Graduate of the class distinction.
After college, she landed at the University of Colorado in Boulder through an NIH fellowship, where she received her masters in biochemistry and met her husband, a professional skier at the time.

Unsure whether she wanted to matriculate to medical school or law school, she applied and was accepted to both. She shared that while she had a deep passion for science and medicine, her love of working with people drove her decision to choose law.

She attended the University of Connecticut Law School, where she graduated second in her class and with highest honors and served as editor-in-chief of the law review. She recounted with humor an incident at graduation when she was four days out from giving birth to her first child and had been given the honor of carrying the flag because she was top in the class. A strong gust of wind blew nearly toppling her and the flag. Henderson had sprained her ankle a few days prior but despite the injury was determined to fulfill this honor. She said, “Despite a sprained ankle, I didn’t drop the flag!”

After three federal clerkships, she took a job teaching as an assistant professor at UCONN. After the birth of her second child (and a KO alum!), she took a break to be home with her children. Henderson continued to work part-time in a law firm for over 13 years and then practiced as a solo practitioner. She also consulted for the CT legislature and taught as an adjunct at the law school. She went on to have two more children.

She abides by the credo that ‘everything happens for a reason.’ She believes that if you do the right thing and trust your gut, good things will happen. Her brainchild, Westfield Academy, is a perfect example of this. Henderson homeschooled her children until high school. As someone with a passion for communication skills, both verbal and written, she feels it is immensely important for people to find their voice so that they can go out and do what they are meant to do in the world. “Kingswood Oxford is one of the places where you get a chance to do that. There are not a lot of places like that in education,” she said.

Now in its fourteenth year, Westfield Academy is a community school that focuses on empowering youth between the ages of 8 and 18 through speech, debate, and Model UN. Its mission is to help each of their students find their own voice and to empower them as self-advocates and agents of change in the world. It pulls students from all over the state, as well as neighboring states, and is immensely diverse on every level. Additionally, Westfield Academy has a very strong outreach program to children from underserved communities, including refugees.

The school has organically grown via word of mouth and quietly boasts top results from most every competition they participate in. “It sounds crazy but all along the way we have made decisions based on what feels right and it has just worked for us,” she said.

Henderson said, “Einstein had a saying; ‘We can’t use the same thought process that got us into the problem to get us out of the problem.’ We tend to keep going down the same path so we need to think out of the box. And as a leader, realizing the intention you put into a problem is as important as the attention you put into a problem. As a society, we don’t give as much time to that. Kids are under an immense amount of pressure to do so many things. One of the reasons I started Westfield was because I want kids to really sit and think.”

When asked what was her biggest source of learning, travel was near the top. But even bigger? Making mistakes. “Mistakes are opportunities to learn. The stakes are high in society, and we get afraid to make them. Mistakes are fine. As long as you don’t make the same mistake twice,” she said.

Henderson always had a zeal and tenacity for life, but it was after a terrifying stage four bone cancer misdiagnosis of her oldest son that her family really learned that life can turn on a dime. The health scare turned out to be a tumor that he made a full recovery from, but Henderson said, “Coming off of that reshaped the way our family saw the world. Ultimately, the experience was a gift and made us realize more than ever that life is a gift and you just have to live every day.” She emphasized the support of the community at large and specifically the Kingswood Oxford community during that time. “Everyone was incredible, and we saw love in a very dark time.”

“I have a friend that always says, ‘Life is a book. I can’t wait to turn to the next chapter to see the plot twist.’ And I love to think of things like that because when things are really bad it makes you realize things are going to change,” she said.

Her advice? “Go for it. Take life by the reins. Realize that you own the tapestry of your journey so no matter what, take chances...go off the beaten path. We worry so much about what people think. Your job is bigger than that,” she said.

The conversation with Henderson ended with the not-so-small question as to whether the future excites her or scares her.

“The future always excites me,” she said. “I work with a lot of kids in high school and generally speaking, they are way more pessimistic than previous generations. While I understand the pessimism and agree we are in very challenging times, I choose to be optimistic. I think we need life-changing action on a societal level, not just on an individual level, but I think we can do it. And it sounds simplistic, but I think an important first step is to start talking to one another and listening to one another,” she said.

Henderson urged students to step up to the call to action that is in front of them, and use their powerful voices to inspire change.

“It’s all about ideas - students getting into groups with their peers. I see so much growth in these situations. Surround yourself with interesting people. For future leaders, create communities around what change is important and have the courage and determination to say ‘we are going to do it.’ Really not being afraid to be grounded and talk about intent and what matters,” she said.

And suffice to say never...NEVER...go home and practice coloring within the lines.
Back