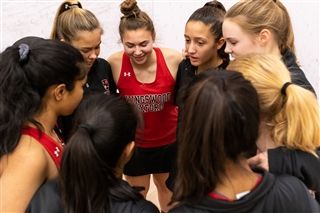 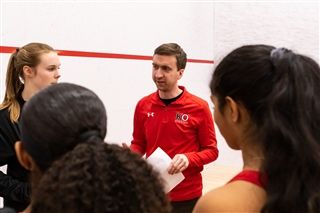 2/28/2020
This record is even more impressive when you factor in that those three losses come from Founders League teams much higher than Kingswood Oxford in the New England prep school rankings. Coach Cameron Biondi said, “Almost all of our players were playing in significantly higher positions on the ladder. That means that they elevated their game and learned to better handle the pressure of more intense matches as the season progressed. We had some especially big wins in the middle of the season against Kent (5-2) and Berkshire (4-3) that demonstrated our ability to maintain the level of our game in high-pressure situations.”

At Nationals, the team moved up an entire division from last year, putting them at the top of Division IV (they won Division V last year). This past weekend was one full of close matches that Biondi shared “were great opportunities for the growth of individual players and of the team as a whole.” In the round of 16, KO beat Hackley 4-3, realizing that their division would be a close battle every step of the way. The team suffered a tough loss to Kent 5-2 in the quarter-finals but used it as inspiration to enter the consolation bracket even more determined.

In this round, they won against the Hill School 5-2 and finally lost against Rye Country Day 4-3. Biondi cited that the level of competition and the intensity of matches was high and the tournament itself was a great one to be a part of. “Our players really showcased all of the hard work they put into their technique, their shot selection, and their resilience over the course of the season,” he said.

As a coach, Biondi shared that while he enjoys the full-team matches of Nationals, he looks forward to the individual tournaments of New Englands as a way for players to really test their personal growth over the season.

The divisions are smaller this year (eight teams), so Kingswood Oxford will be in the C division with many of the teams they have played in the regular season and at Nationals.

“I especially look forward to seeing how our players deal with rematches against players they beat or lost to during the regular season, applying strategy and adaptability to elevate their game,” Biondi said. “My hope is that it's a challenging and enriching experience for everyone involved.”
Back