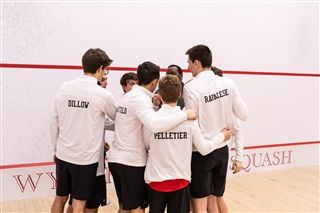 3/5/2020
The Varsity boys’ squash team won the Class D New England tournament this past weekend, an impressive culmination of a terrific season filled with great competition and a lot of hard work. The tournament spanned Saturday and Sunday and took place at Westminster.

Out of the eight teams that participated Kingswood Oxford was seeded number one. Scheduled to play against BB&N first thing Saturday morning to kick off the tournament, the opposing team pulled out at the last minute so the Wyverns filled in the break with an hour practice to ensure that players stayed sharp physically and mentally.

They faced St. Luke’s School in the semi-finals later that day. The match started with the even numbers 2, 4, 6, and 8. Number two spot Henry Krieble ‘21 opened up with a win. He played an impeccable match, finishing off his opponent in a 3-0 victory and winning game three with a score of 11-1. Carter Smith ‘22 played reserve as number 8, winning the match 3-0. In the third game, he dominated the entire game-winning 11-2. Henry Pelletier ‘22 played number 4 in the team. After a tough first two games, with game scores of 11-13, and 10-12, Pelletier came back and won game three. Games four and five were blowouts; in game five, Pelletier held a 10-4 lead before winning the game 11-6, completing a 0-2 comeback. In his opening game James Ravalese ‘20 played more of traditional squash by hitting the ball to the back. This led him to win 3-0. The next set of play was with odd numbers 1, 3, 5, and 7. Teddy Keegan ‘22 won his first match convincingly 11-3. In his next match, he went on to dominate the center of the court and made his opponent run all over the court. He won the match 3-0. After a rough start leading to a 0-2 deficit, Matt Marottolo ‘20 found his pace and began winning. In the fifth game, the score went to 10-9, where Matt finished a short rally to win the game 3-2. Captain Nick Choo ‘20, faced an opponent who was ranked higher than him in the US Squash rankings. That didn't stop Nick from giving his best performance. His opponent challenged every part of his game, Choo fought hard but lost 3-0. Aidan Dillow ‘22 played an incredible game of squash, with a clean sweep 3-0 match score. He continued to improve in his play as he widened the winning score of each game.

The team met on Sunday morning at KO to drive to Westminster School as a team for the finals. Listening to music during the ride to get pumped up, they were there early to ensure that they could get enough warm-up in before the match. Coach Robby Lingashi said, “It was encouraging to see all the players taking the right steps to warm up before the match.” It so happened that Kingswood Oxford was playing against rival Green Farms Academy in the finals. Green Farms defaulted number 8 position which made Carter Smith ‘22 get a pass. Teddy Keegan ‘22 opened the match with a 3-0 win. The entire match he was in full control of the game, winning game one 11-4, game two 11-2, and game three 11-6. James Ravalese ‘20 had a tough game one. Using some of the new shots he learned in practice, he came back to win game two 11-2. After that, the match became more back and forth but was able to clutch up in game five winning his match 3-2. In a very competitive match, Henry Pelletier ‘22 pulled out a win 3-1. After the opponent tied it up in game two, he came back to the next game with new energy and continued to win the next two games. Up against a tough opponent, co-captain Henry Krieble ‘21 played very well, going point for point most of the games.

Unfortunately, the final match score ended 0-3. Up against a tough opponent, Nick Choo ‘20 put in a valiant effort, but sadly lost with a match score of 0-3. Matt Marottolo ‘20, unfortunately, lost 1-3, but he played very well. Aidan Dillow ‘22 was playing the decider match which stretched the team’s win to 4-2. When he was playing, the overall match score was 3-2. In both games one and two, Dillow played well but unfortunately lost in close matches both times In game three, Dillow approached the match with a new intensity. He played extremely well the next two games and ended up winning the match for the team 3-1 which gave Kingswood a 4-2 win.

Lingashi said, “I would like to offer a huge congratulations to the boys. It seems like it only took two days to win the Championship for a second time but in reality, it took a whole season for the good work the team has been doing. As a coach, I am very proud to be part of Wyvern Nation. We go up against schools that recruit kids from all over the world and yet we remain more competitive than any of them. It gives me great honor to see this happening at Kingswood Oxford. Thank you to the athletic department, led by Debby Fiske, for giving us all the support we needed for practice and schedule. And a huge thank you all the parents who traveled with us during the entire season. It can’t get better than this. Go Wyvern Nation!”
Back