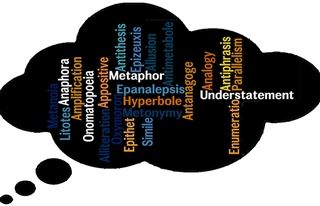 A Convincing Group with a Dash of Rhetoric

4/20/2020
Maureen Lamb’s Latin 3 class used persuasive speeches to practice rhetorical devices. Each speech was at least 1:50 but no more than two minutes long and addressed a topic that the student was passionate about.

As if most of us wouldn’t clam up at the mere thought of giving a near two-minute-long speech, the assignment required that the speeches employ at least five rhetorical devices. For those of us who need a memory jog from English class so many years ago (we did), a rhetorical device is a technique often used to evoke emotion in an audience or reader; it uses words deliberately with the intent to be persuasive. These could include everything from alliteration to onomatopoeia to personification.

Do you remember the classic: Peter Piper picked a peck of pickled peppers? This is an example of alliteration, one of a series of rhetorical devices. Along with names like Dunkin Donuts, Best Buy, and Krispy Kreme. It's raining cats and dogs? Classic hyperbole.

Lamb graded the students on their ability to speak loudly and clearly, the use of hand gestures, and making eye contact with the audience. Doing this virtually made it all that much harder but every single student effortlessly delivered.

There was an impressive range of topics that included: exploring what makes (or doesn’t make) a villain in Greek mythology, persuading the listener that heavy metal music is indeed the best genre of all, convincing the audience that sports are the greatest invention of mankind due to its benefits of inclusion and teamwork. The student remarked that sports are "what allows common people to produce uncommon results.” One speech tackled the litany of downsides to grass lawns, and the last speech presented why Dwayne "The Rock" Johnson should run for president. Regardless of one’s political views, the student threw a solid argument and plenty of rhetorical devices to make it pretty convincing.

After each student had completed their speech, Lamb asked them to reflect on the difficult parts of th assignment. The group almost unanimously responded with the difficulty of fitting it into the time allotted while presenting all of their argument, and, well, just starting the speech! When asked what their suggestion would be to future classes, they echoed one common sentiment of choosing a topic one is passionate about. It makes convincing others of your viewpoint while writing in a deliberate manner much easier.

While "rubber baby buggy bumpers" is arguably always going to be hard to say five times fast and "sheep should sleep in a shed," as well, one thing is for sure, s/he knocked it out of the park with those speeches.

(For those readers that said hyperbole on that last one... well done).
Back