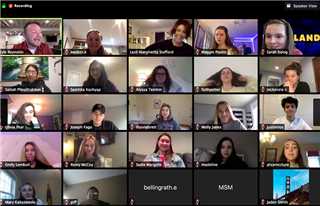 4/28/2020
Broadway actress Lesli Margherita brought her insight, expert critique, and more than an exceptional touch of dazzle to a group of over 40 faculty, staff, Upper and Middle school students, prospective and recently admitted students via a Zoom masterclass on Monday, April 27.

Theater students performed audition songs of their choice and submitted them to Margherita prior to the masterclass. Margherita was impressed with the breadth and challenge of the songs the group selected. “You guys picked hard stuff!” she exclaimed.

She reviewed as many auditions as time allowed, and critiqued one by one, giving them pointers on everything from improving their break, getting out of their own head, and really focusing on the lyrics, and deciding what they thought about the character singing them and as individuals themselves.

Margherita spoke about her own experience and emphatically encouraged the students to focus on the journey, regardless if it ends with Broadway lights. “Theater isn’t just in New York. There is theater everywhere and important theater, too. “Broadway is just a street, not the end all be all.”

Part two of the masterclass was a question and answer portion, and several questions focused on the process of auditioning and how to put your best foot forward. The most important thing according to Margherita? “Go in confidant. They will notice. Do whatever hype you need to before….but.” Yes there is a but…
“But always be you. If they love what you bring to the table, things can be changed, things can be rewritten. The most important thing to be you and you show them that through your storytelling. That will set you apart from every other person. Don’t be a bad version of someone else."

As she recounted her own journey she admitted the thought of going to college as a theater major in New York was terrifying. She chose pre-law and had what she described as “a great college experience. It does not matter where you go, you will all end up in the same arena. You won’t get a job because you went to a certain school, you will get it because you are the best for the job.” Using her exceptional Broadway star timing after that statement, Margherita leaned into the camera and pointed at her audience. “Did you hear me?! That was important.”

Even for those students not matriculating to college specifically for theater, the actress enthused how much the experience of acting would open up a myriad of other avenues such as making a presentation and being confident in your day-to-day tasks. "Your interests outside musical theater help those in and vice versa,” she said.

Margherita recounted hard work, commitment, and developing a press-on mindset when it came to the business side of showbiz. “The business part of it has nothing to do with you or your talent...but it will affect you,” she shared.

“You have to take the personal out of the show business because the business side of things can be the most heartbreaking. You can get to Broadway and it might not know as planned. Just be happy you got there. Whether it lasts an hour or 10 years. You got your dream.”

In essence, she mused, the theater could be a good microcosm for life. It takes doing the things you don’t always want to do, because you know you might be called upon to do it later - always honing your skills, improving, gumption. The bottom line according to Margherita?

Margherita is an American stage and screen actress. In 2009, she won the Laurence Olivier Award for Best Performance in a Supporting Role in a Musical for her performance as Inez in Helen Edmundson's musical, Zorro. She also appeared in Matilda as Mrs. Wormwood. Her additional credits include Man of La Mancha, Showboat, Little Shop of Horrors, and Dames at Sea. She has also starred in numerous television shows including NYPD Blue, The District, and JAG.
Back