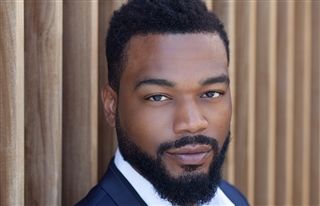 5/1/2020
Broadway legend Grasan Kingsberry brought his A+ game and some serious choreography to a virtual Broadway masterclass on Thursday, April 30. Whether the backdrop was a basement, a bedroom, even a laundry room, he got a group of over 30 theater students moving and grooving... virtual style.

Kingsberry led them in a combination of "We Dance" from Once On This Island, a number he had to learn for Broadway. He playfully noted that he and the cast had to learn the dance barefoot in the sand.

He explained that this song was perfect for all levels of dancers.  He also noted the exceptional work of choreographer Camielle Brown who was the talent that originally composed the dance routine. “She was incredible,” said Kingsberry. “She could get anyone to dance regardless of their skill level.”

Kingsberry’s resume resembles that of a lengthy CVS receipt, and yet he is, as Director of Theater Kyle Reynolds describes him, “a gentle, kind, courageous, joyful, and overall a model of professional and friendly disposition which is rare for someone who upholds as many accolades as he does.”

After the group combination, at the prompting of Reynolds, a few brave souls performed the combination individually for Kingsberry so he could critique them. Remy McCoy ‘20 and Olivia Pear ‘21 stepped forward to embrace the challenge.

It offered a perfect segue into Grasan talking about how a career in theater involves putting yourself out there constantly, even when you didn’t want to. “It starts with dedication and drive no matter what,” said Kingsberry. “You have to have a dedication and work towards getting better, even in those areas that aren’t your favorite.”

And above all, be someone that people want to work with. “Show up warmed up, ready with a good attitude. Set a good example for yourself...after all you are representing your brand. The more you work, the more people see what you offer and the more people will call you,” he asserted.

When asked who or what inspired him, Kingsberry acknowledged the Alvin Ailey American Dance Theater based in New York City, and in particular, dancer Desmond Richardson. Richardson was the first African-American principal dancer of American Ballet Theatre and is hailed as one of the greatest dancers of his time. “I had never seen someone so masculine but so fluid and expressive in movements,” said Kingsberry. “I saw someone I could see myself in.”

“Find things you look towards or that inspire you,” he encouraged. “Things you idolize to bring your natural gifts to. Be you...inspired by that person. What is it about them that you like? When it comes to people you are inspired by finding the discernment in why...not just because everyone else likes them.”

One particular notable performance Kingsberry is known for is his role(s) in The Color Purple revival, a dramatic musical based on the Pulitzer Prize-winning novel by Alice Walker that showcases the early-20th century plight of African Americans in the south, through the lens of the young character Celie.
The storyline itself carries a great deal of heavy content and shines a light on a great many racial issues. As a man of color himself, when asked about how he was able to take on the role and separate his own experiences to perform Kingsberry said, “This isn’t your experience. It is for the audience. Your job as an actor or actress is to tell the story and not to comment on it so the audience can live the journey themselves.”

He asserted that this is where hard work and practice come in. “With training and repetition, you learn how to get on stage and not lose it,” said Kingsberry.

When asked how musical theater is adjusting to reflecting the change in people of color Kingsberry commented, “In a normal Broadway season, there are not enough stories of or about people of color. But remember, you are dealing with a commercial entity in the theater. It has to sell. They have to attract a crowd. That said, the business needs to give people a chance to tell their story.”

Giving people of color the platform of Broadway is giving them the opportunity to tell their story,” said Kingsberry. “More producers need to give this opportunity. It goes for all groups. Women, minorities, people of color. It is up to us to create this for ourselves.”

Kingsberry has appeared in eleven Broadway shows with 22 Broadway roles include Aida, Dirty Rotten Scoundrels, Finnian’s Rainbow, Catch me if You Can, Leap of Faith, Motown the Musical, The Color Purple Revival, and the revival of Once on This Island. He has worked with Beyoncé, Jennifer Hudson, Toni Braxton, and even performed for Barack and Michelle Obama. He has also appeared on Oprah, All My Children, The Today Show, Good Morning America, and David Letterman and is a Daytime Emmy Award winner.
Back