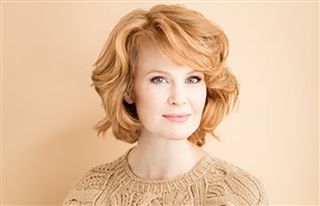 5/5/2020
Enter stage left and right and center...Kate Baldwin. She topped off Broadway Week at Kingswood Oxford with a high note. Baldwin started her masterclass by jumping right into the songs students had submitted to her, offering a great deal of critique into individual performances and drilled down into their strengths. She applauded students on their song choices. “You guys have good taste!” said Baldwin.

As Director of Theater Kyle Reynolds said in his introduction, “Her Broadway credits are lengthy, but most importantly, admirable. They include The Full Monty, Thoroughly Modern Millie, Wonderful Town, Finians Rainbow, Big Fish, and Hello Dolly. For me, she is Nicole Kidman, Bernadette Peters, Audra McDonald, Liz Callaway, Marin Mazzie, Reba Macentire – all in one.”

Baldwin emphasized how storytelling in a musical is critical and worked through how nuances in songs and more specifically lines, are the name of the game. Digging into a word at the end of a line,  punching certain parts, breathing in a sentence are all imperative for the story to make sense. “Lines are what create a sense of suspense, said Baldwin. “ If you break a line, you run the risk of losing the audience engagement.”

Baldwin took great detail to the more technical side of the theater world, working through aspects such as phrasing, sliding between notes, intervals, visualization, and vowels. “I liken putting down notes to ice skating, she said. “You need to put your entire blade on the ice so you can glide.”
Kingswood Oxford history teacher and singer extraordinaire David Baker participated in the masterclass, and he commended Baldwin on her spot-on critique across the board. For a Broadway star whose schedule is packed to the brim, Baldwin took an exceptional amount of time to spend with each student who submitted work to her.

“Always protect the possibility of a happy ending. That is what people in musicals are trying to do. The way you sing a song can convey this, or ruin it,” Baldwin said. “The trap is making it a song about woe is me. It isn’t about you. It is about the character the song is about.”
Baldwin appeared in the Broadway hit Thoroughly Modern Millie, which Kingswood Oxford recently performed for their spring musical. The show carried with it a great deal of commentary around issues of race and discrimination, which KO students workshopped a great deal prior to ensure they were addressing identifying all angles. Director of Theatre Kyle Reynolds posed the question to Baldwin about her experience with the show and any negativity she experienced, which she debuted back in 2002.

Baldwin acknowledged the difference in timing of her show, "The world was a very different one in 2002, especially pre-September 11th. “There was not a whiff of protest or backlash or discomfort when we presented it.”

She drilled down. “I think one reason for this was the actress playing Mrs. Meers (arguably a highly contentious character), was committed to making sure that everyone came to the show knew that she was the bad guy, a misguided person from the start. She was the pillar of how now to behave.”

As an understudy for Ms. Dorthoy, Baldwin reminisced about how all of the understudies would meet after rehearsal, make dinner and run lines to get familiar with the material. This group included now household name Sutton Foster, who was the understudy for Miss Millie at the time. Baldwin humorously recounted how it goes to show an understudy is never to be an underestimated role.
Foster was called upon to perform Millie after the lead got ill, and her career took off. Baldwin said, “She assimilated the material quickly. They ended up building her personality into the show.”

Baldwin is a two-time Tony Award-nominated actress and singer known for her work in the musical theatre circuit. She was nominated for the 2017 Tony Award for Best Featured Actress in a Musical for her performance in Hello, Dolly! Her other Broadway credits include Finian’s Rainbow (Tony Award, Drama Desk Award, Outer Critics Circle Award nominations), Big Fish, The Full Monty, Thoroughly Modern Millie, Wonderful Town, and Fiorello! (City Center Encores!). She's performed in off-Broadway in Giant (The Public Theater; Drama Desk nomination), John and Jen (Keen Company; Drama Desk nomination), and Songbird. Her concert engagements include the Boston Pops, New York Pops, and the major orchestras of Washington, Detroit, Portland, and Phoenix. She's been seen on television in Law and Order, SVU, Passion and First You Dream: The Music of Kander & Ebb. Recordings include: Let’s See What Happens, She Loves Him.
Back