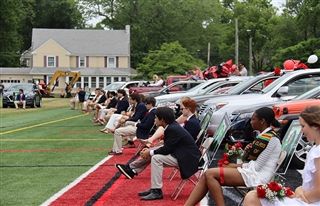 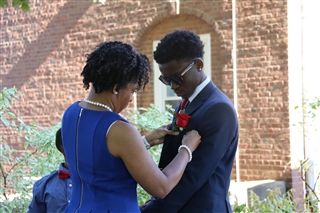 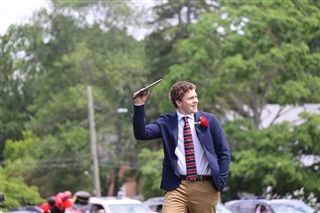 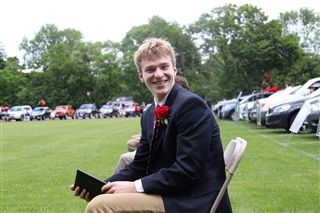 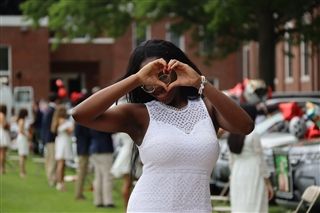 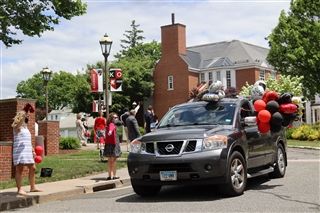 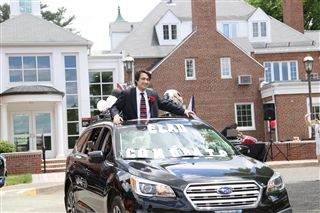 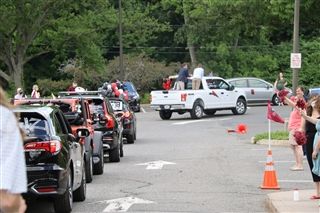 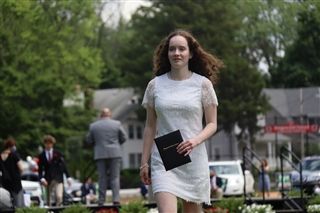 6/8/2020
After tens of hours of planning and overcoming logistical challenges that would have created headaches for most skilled military generals, Kingswood Oxford held a historic socially-distanced 108th Commencement for its 93 graduates on Sunday, June 7. Originally set for June 6, even the weather failed to cooperate as heavy thunderstorms predicted (and surprisingly punctual) for Saturday afternoon pushed the celebrated day to the following one.

School administrations were impelled to uphold as many of the KO traditions that make the day so special to legions of Wyverns while abiding by health recommendations from the state. Normally, Commencement occurs with seniors and their families assembling on the Senior Green. However, due to social distancing guidelines, the event moved to the softball field which accommodated one car per family, heavily festooned with red and black balloons, photos, congratulatory messages, and even one with wyvern wings and tail, to surround a stage. Each senior sat in front of the family car that was marked off with a poster of the graduates, and families remained in their cars. As each student's name was called, the student took a lengthy walk to the stage where Head of School Tom Dillow conferred a diploma to each graduate. Instead of polite applause as each student received their diploma, Dillow encouraged the attendees to honk their horns which they did with enthusiasm.

Prior to the graduation, students and their families scheduled time on the Senior Green to receive their customary red rose bouquet and boutonnieres and have a quick photo shoot. The soon-to-be graduates and their families waited in the Trout Brook parking lot to begin the procession in their cars through the campus, to the wyvern-guarded front gates with a congratulatory banner and onto the softball field. Two bagpipers opened the ceremony followed by a smaller orchestra and chorus playing “Hail, Kingswood Oxford.”

History teacher Ted Levine led the Invocation who reflected that although times had changed over the past several months, the "essentials of community and really the same." He exhorted the class "to do good things in these interesting and challenging times...times when we will all confront who we really are...bring caring and generosity to your worlds."

Remy McCoy ’20 introduced the graduation speaker Upper School English teacher David Hild ’80. Hild reflected on the school’s core values of integrity and involvement and expanded upon their true meaning to lead a purposeful life with a list that including:

•These people don’t overthink their decision to choose to live this way. They didn’t weigh the costs and benefits or give in to fear.
• They had a mentor, someone who planted an ideal in their mind’s eye. Somebody set a high example for them of what a good life looks like.
•They ignore material rewards. Their identity is not based on a title or a paycheck. We see them serving others and it looks like self-sacrifice, but it doesn’t feel that way to them. They’re just being true to themselves.
•They constantly expand their goals. They are to moral life what lifelong learners are to intellectual life.
•They expand their ambitions in the face of hardship. They’re willing to be uncomfortable, physically and emotionally. Think about what we’ve been through this spring... what we’re going through right now. This is a REALLY hard time in this country, so perhaps we should heed the advice of writer James Baldwin: “Not everything that is faced can be changed, but nothing can be changed until it is faced.”
Head of School Tom Dillow offered the Charge to the Senior Class and expressed that although the students are entering a world with more uncertainty, the students should focus on the "many blessings you have today." He remarked that we are in a powerful moment of anti-racism and justice in history that we should not let our indifference be a default measure. "Read and study, gain a fuller understanding of why these inequities exist, consider what you could do to make a difference. It may be that you decide you will no longer stay silent when you witness hateful language...We should not be silent bystanders to history or stand idle in the march towards becoming a more just and equitable society."
Upper School history teacher Rob Kyff read the Farewell to the Class:
"Kingswood Oxford Class of 2020:
In times of great hardship, we find out who we truly are.
During the past three months, as our nation has experienced
the tragedies of deadly disease, economic privation,
and racial injustice, each of you has discovered your own
inner courage, fortitude, and resilience. Sustained by this
powerful core of character, may you now go forth,
not only to master the world, but also to heal it. Godspeed!"

Of the 93 graduates of the Class of 2020, 53 received honors, and 18 will play sports at the collegiate level.

As the students recessed in their cars, they traveled back to the Trout Brook parking lot which was lined with faculty members shouting the graduates’ names, fist-pumping, cheering, and waving red and black pom poms. Although the warm hugs and handshakes among faculty were missed, there were countless blowing of kisses suspended in the air and several tears shed.

Although not a typical KO graduation, parents and students appreciated the measure the school had gone to create a memorable and joyous event to celebrate the class. As one parent shared with the Head of School, "Whoever was on the logistics team for graduation were brilliant.  Assembling in the parking lot, the "car parade", and the actual field arrangements were phenomenal.  While it did not completely replace the tradition the kids were looking forward too it really made them feel special about their accomplishments.  I am sure in a few years at an alumni event they will even brag and say "we were the only class to have a "car parade - tailgate" for graduation."
Back