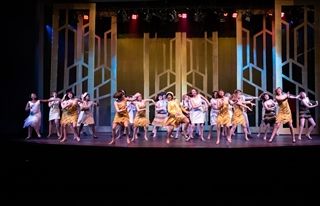 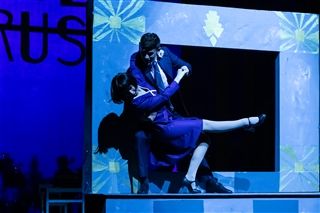 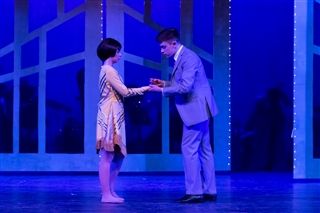 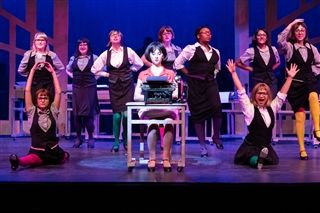 6/25/2020
Kingswood Oxford took home the big prize at the annual Halo Awards for Best High School Musical in the state on Wednesday, June 25, for their outstanding production for Thoroughly Modern Millie — the first time in Kingswood Oxford history —along with awards for Best Musical Duo for Remy McCoy ’20 and Joey Fago ’20 for their roles as “Millie” and “Jimmy” in the production. Even the stage crew was acknowledged for their pivotal work and earned the Best Running Crew award.

The Halo Awards ceremony, sponsored and streamed online by Seven Angels Theatre in Waterbury, was projected on a movie screen in the Roberts Theater so that KO student actors who were in the performance could view the announcements. Director of Theater Kyle Reynolds and Chorus Director Steve Mitchell outfitted the theater with a red carpet and balloons to imitate the mood of a true awards ceremony. Reynolds said, “I wanted that top prize so badly. We put so much effort into the production to make it a possibility.” Reynolds felt it was important for the cast and crew to be together to watch the ceremony, and now that the social distancing protocols have lifted somewhat, he was able to accommodate the cast in the theater while abiding by health guidelines.

“I was amazed and proud of how our students clapped for the winners even if we lost out on an award. They showed so much love and support for the fellow actors at other schools.” Although McCoy and Fago were nominated for Best Actress and Actor, respectively, in a musical and did not earn an award, Reynolds felt the award they did win for Best Duo was even more meaningful. “I tried to inspire them as actors to fall in love so that the relationship was authentic on stage. I’d rather be convincing so that they looked like they fell in love on stage,” Reynolds said.

Remy McCoy, who played the titular character in “Millie” and who is headed off to New York University’s Tisch School of the Arts in September, said the moment felt “amazing” when they learned of the win. “We were very lucky to have performed the show. Due to COVID-19, so many seniors did not get the chance to be in their final performance and my heart goes out to them. I still believe that Mr. Reynolds would have figured something out even if it meant us performing in bubble wrap.”

“One of the things that I’m most proud of is how we dealt with problematic race issues in the play. We fully educated the school community prior to the show and ran workshops to show that this time period of the 1920s was not a golden age. The lessons that we learned about racism and human trafficking are even more important now than they were a few months ago,” McCoy added.

“We spent hours of prep time, rehearsal, and set building on the show. More than that, we had an entire educational curriculum built around the Chinese Exclusion Act and other discriminatory practices in the 1920s that we talked about to our students. It was a really holistic way to do a show. Theater is a tool for engagement and education. It’s not just about the applause,” Reynolds said.