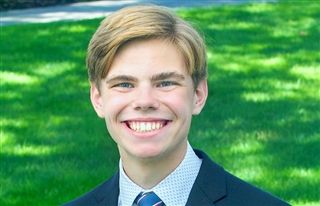 9/16/2020
Kingswood Oxford student Braeden Rose ’21  has been selected as Semifinalist in the National Merit Scholarship Competition based on his score on the PSAT/NMSQT. About 16,000 students nationwide are selected as semifinalists.
This means he is among the top 1% of the 1.5 million juniors who took the PSAT/NMSQT exam last year. He will now compete for designation as National Merit Finalists and for Merit Scholarships to be awarded next spring.
Dan Gleason Head of the Upper School said, “We are so proud of Braeden, not only for his academic accomplishments and earning this distinction but on his involvement in many ways in school and community life. He demonstrates a commitment to excellence in whatever he tackles and does so with such enthusiasm!"
Rose is an active member of KO, bringing his energy to everything he does. It’s a wonder how he accomplishes it all - and always with a big smile!  This past spring he performed in one of the lead roles in KO’s award-wining Best High School Musical in Connecticut, Thoroughly Modern Millie as the evil Mrs. Meers as well performing in Chicago the year prior. Interested in global affairs, Rose is the chair of the annual Yale Model U.N. and chair of KO’s Model U.N. (KOMUN) for middle schoolers. He is co-president of Forensic Union and earned the honor of second-place novice speaker at a tournament at Roxbury Latin last fall. He is the associate news editor of features at the student-produced KO News; a member of Crimson 7 the boys’ a cappella group since his sophomore year as well as Outlook. He brought his passion and determination to the Mock Trial team which was named the state co-winner with Weston High School last spring.
His achievement on the PSAT is just one other accolade to Rose’s list of accomplishments. He has embraced a wide range of opportunities at KO and made the most of his time at the school.
Back