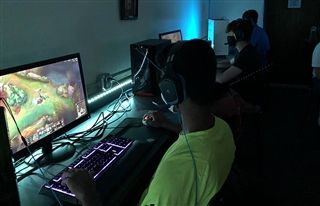 9/17/2020
There’s a new team on campus, but it’s not what you’d expect. Gone are the traditional practice drills of burpees, sprints, lunges, and touch-and-goes. Instead, this team of 12 cracks their knuckles, performs neck rolls, and sits down in the Real-time Strategy room in the Roberts Building to play Esports or electronic sports video or pc games. Esports takes video gaming to another level with organized competitive gameplay between two teams, governed by its own strict set of rules and guidelines.

Sessions run every day after school like our traditional sports and satisfy our sports requirement. The fall season includes a week-long preseason, an eight-week regular season, and playoffs. The team plays a mix of independent and public schools in a particular region, in KO’s case, against teams in Connecticut and Massachusetts. KO faced off against Woodstock Academy just recently in a pre-season game and came away with a 1-1 tie. Depending upon the success of the program, KO may consider offering Esports as a spring sport; the league does not offer it as a winter option.

Our Wyverns are competing in three team-based games: League of Legends where 5 vs. 5 teams face off and each player has an offensive and a defensive role to destroy the other team’s tower; Rocket League, a 3 vs. 3 teams score soccer goals using cars (yes, you read that correctly); and Overwatch, a  6 vs. 6 game that is similar to League of Legends where the object is to eliminate players or capture a map.

Coach and Director of Technology Dan Bateson, “Esports teaches teamwork,  communication, critical and strategic thinking, creativity,  sportsmanship, and leadership — much like traditional sports. It gives an opportunity for some kids who aren’t as adept in an athletic sport to participate in a team-based environment.” Additionally, for our students who are remote learning currently, Esports allows them to engage with their peers and build community after school while at home.

As a coach, Bateson organizes the games, sets up communication with other coaches, creates line ups and talks about strategy with the team. “We also watch professionals play the game so we can learn techniques. We also review our own game footage to finesse our own playing,” Bateson said.
The students are required to follow standards of behavior outlined by the league which includes many of KO’s own core values: be respectful to all players, coaches, and league officials, use only appropriate language, and playing with integrity.

Esports reaches beyond traditional sports to create an all-inclusive environment that breaks barriers. Can’t wait to see some gaming in action!
Back