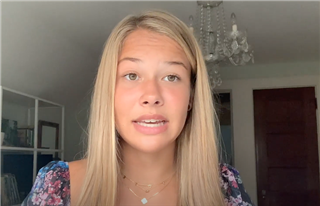 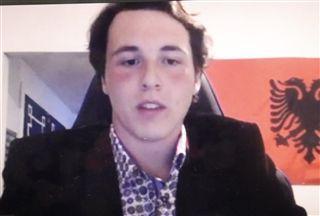 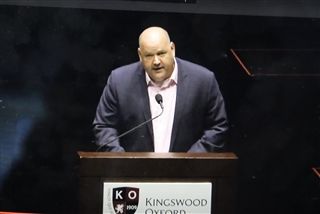 Convocation: The Official Start of the School Year

9/21/2020
The official start to the new school year kicked off with Convocation which occurred a little later this year. Like much of 2020, the Convocation took on a different look and feel, this time virtually.
Head Prefect Sloan Duvall ’21 shared a story about perspective, reminding her classmates to take in the full picture of the year. Although she acknowledged that the year will be full of challenges ahead she said, “Instead of thinking that something is bad because it’s different, try to take a step back and look at the full picture. Maybe, it will turn out to be good.” She told her fellow Wyverns to focus on the things they can control like practicing social distancing and wearing a mask to become the best versions of themselves to keep the community healthy and safe. “Let’s respond with creativity and maturity and have zero regrets,” she said.
Speaker Eden Nenshati ’21 offered advice to each of the forms. As a seven-year senior who has been at KO since his Upper Prep days, he had the vantage point of experience. To the sixth graders, he proffered to meet someone new since this person may become a lifelong friend. To the seventh and eighth graders, he suggested they cherish the moments with one another and reminisced about a memory of his friend singing “Waves” every morning. He told the freshman to use the faculty and upperclassman to help them find their way rather than stressing needlessly. “Using the faculty and staff as a resource is key to winning freshman year.” He told the sophomores not to hold grudges, the juniors to buckle down and prove themselves in this critical year, and the seniors to lead and set a positive example through the school year.
The Dux Prizes were awarded to the students who held the highest grade point average of their class at the end of the year. The honorees were: Nora Pond (UP), Ysabel Albert (Form 1), James Livingstone (Form 2), Maggie Dwyer (Form 3), Emma Levinbook (Form 4), and Olivia Pear (Form 5).
Despite the potential for a polarizing environment ahead due to the presidential election, Head of School Tom Dillow charged the students to engage in constructive conversation as well as becoming a more inclusive and anti-racist environment where all members of the community feel an authentic sense of belonging. Dillow used the school’s motto “vincit qui se vincit “one conquers by conquering oneself” as a guiding principle for the students’ behaviors this year to gain control over the emotions passions, and instincts that can derail us. Dillow stated that the country has lost its ability to listen to one another. “The reality is that humans are hard-wired to support this kind of tribalism, and we look for arguments and information that validate our side and our position.” He argued that although we like to think we respond to reason and understand a situation objectively, we tend to use the emotional part of our brain that functions as a defense attorney. He noted that a Harvard Implicit Association test proved that the brain’s automatic default system is to divide and categorize people into groups that create an 'us versus them' mentality.  Dillow believes that we are capable of overcoming our tribal brain by strengthening the cognitive tools that help us override this built-in system. He suggested the students “Listen carefully to the other position. Find something in someone else’s position to validate and acknowledge. Question your own beliefs. Practice empathy by truly trying to get into the shoes of others and see the world from their perspective.” By practicing these measures and leaning on the core values of the school like respect and integrity, the members of the school community can overcome inherent biases and make progress towards dismantling systemic racism and developing character and intellect.
Back