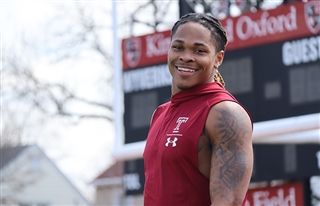 10/1/2020
If you were to pass Isaiah Wright ’16 walking down the street and observe his 6’2” frame of well-defined muscles, confident stance, and tattoos, you would no doubt think to yourself, “This young man must be a pro athlete.” And, you’d be right. Wright just signed with the Washington Football Team as a free agent in the spring of 2020.

While Wright played football at Temple University in Philadelphia, his versatility and explosiveness were on full display; he made quick moves in both the return game and on offense. One of his proudest moments came against Buffalo in a back-and-forth game where, judging the placement of an opponent’s shoulders and head, he hurdled over an opponent, to score a touchdown. This move was so notable that ESPN highlighted it on air. Adept thinking like this earned Wright the reputation as a “sparkplug” who turned games around.

Wright’s NFL Draft and Combine profile reports that “he played 12 games with one start as a true freshman (eight receptions, 74 yards, 9.3 average; 42 carries, 232 yards, 5.5 average, one touchdown; 11 kick returns, 278 yards, 25.3 average. He led the team in receptions as a sophomore (46 receptions, 668 yards, 14.5 average, four touchdowns) while still producing as a returner (13 kickoff returns, 324 yards, 24.9 average, one touchdown; 11 punt returns, 109 yards). Wright returned a kick and punt for a touchdown again during the next season, becoming one of just three players in the FBS to do so in 2018. He was also named first-team All-AAC as a return specialist.”

But the stats don’t tell the full story of Wright. The tats do. Down-to-earth, thoughtful, focused, and wise, each of Wright’s tattoos conveys special significance that defines who he is, where he is from, and where he is going.

His first tattoo emblazoned on his chest says “blessed” because he said he overcame many obstacles in his path at a young age. The next tattoo, tiger eyes, conveys Wright’s attitude of being alert and ready to attack everything he sets out to do. The image of heaven (where Wright intends to retire) is a constant reminder of the right decisions he needs to make in his life. The words “To whom much is given, much is required” and the woman with roses for eyes tattoos provide more guideposts for him to follow. “I learned at a young age that people who are given a lot of things, should give a lot of things, too,” Wright said, “That’s how it works. To have a lot, you have to give a lot. The lady shows me how easy it is to get distracted. I’m trying to stay straight and narrow to accomplish my goals.”

Wright started playing football in his hometown of Waterbury, Conn., when he was 12 years old. Initially, his parents wouldn’t allow him to play for the youth teams because he was getting into mischief. Watching his friends come home from practice scuffed up, laughing, and wearing their equipment was his punishment. His proactive parents, Nina Wright and Randy Smith focused on his academics and demanded much of the young Wright. When he wasn’t playing football, his dad was taking him to the basketball courts, teaching him to shoot. Wright played football at J. K. Kennedy High School in Waterbury and knew the Waterbury’s Crosby High School head football coach Jason Martinez, who served as KO’s football coach starting in 2011.  Martinez knew raw, explosive talent when he saw it. But more importantly, he saw in Wright a principled young man with leadership qualities that could make a positive impact on the players around him.

“I was already considering going to a different school,” Wright said “I was at Kennedy, and I didn’t know exactly where I wanted to go, but I had a good relationship with Jason Martinez. He was selling the KO program and it was hard not to like everything I was hearing – to get the opportunity to go to KO and see the facility and be around the people who are demanding and care about you. You don't meet many people like that, so it was easy for me to be sold on the program.”

Wright soon settled in at KO, making his mark in football, and learning some important lessons along the way. He played wide receiver and defensive back for Coach Martinez. During his career at KO, Wright caught 91 receptions for 1,917 yards and 19 touchdowns. A three-time all-conference honoree, he also rushed for 330 yards and one score on 24 carries. Defensively he brought down 74 total tackles, 47 solo with four interceptions, and two fumble recoveries. In 2016, the Wyverns took the New England title.

“Honestly, I didn’t expect to win New Englands,” Wright said. “I wasn’t playing for accolades. It was something that I loved to do, and I was continuously getting the opportunity to do it. I was always excited to go on the field and do what I do. And I was learning new techniques from the coaches. I was excited because I was always getting better at practices, but at the games, I could really see how good I was getting. It was just me going out there playing my best, and my goal was to get to college. That was the big accolade for me ”

“It goes back to ‘hard work beats talent.’ You can be as talented as you want, but in life, you need to be prepared. I learned at KO that the better positions I put myself in, the easier it was for me to be successful. For instance, the homework. I was frustrated because I wasn’t doing the homework when I should have been doing it, so I always had to scramble the morning before class. I was getting tired of getting in those predicaments. My grades weren’t showing my actual abilities. So, I had to lock in and start doing the small things so I was in a better position to be successful. That’s when it came full circle. That’s when I started to learn that. It was a life lesson.”

Wright’s teachers attest to his growth as a student. Upper School Spanish teacher Ron Garcia said, “He really worked hard, became a solid student and wanted to be viewed that way. He was great for the class and raised the level of learning for everyone. Whereas some seniors experience the “senior slide,” Garcia witnessed Wright digging deeper and not letting up throughout his final year at KO. Upper School English teacher Jackie Rubin recalled a discussion of Brave New World where Wright challenged the class to think about the final image in the novel. “He was always interested in bringing the class along and engaged them to participate.” She noted his excellent work on an assignment where the students were charged to write a “fake” college essay. In Wright’s case, he penned a satirical piece about the benefits of athletics, a nuanced bit of self-awareness and self-deprecation.

Ed Wasielewski ’91, owner of EMG Sports based in suburban Philadelphia and an NFL agent, represents Wright. Wasielewski is familiar with the athletes coming through the KO football program and paid special attention to Wright’s career by watching games, reviewing highlight reels and reading newspaper articles about his latest creative plays. Wasielewski said he looks for position and versatility in his players. With Wright, he’s got both. “Isaiah’s very dynamic and he’s got a lot of talent,” he said. Typically, I’m looking for a blue-collar, hard worker. A smart guy that can play a long time in the NFL. Are they smart enough to know that they have to play on special teams and play wide receiver? Sometimes guys get drafted, sometimes they don’t. But, that doesn’t change the skill set it takes to make it.”

This past spring, Wright trained in Fort Lauderdale at the XPE Sports facility to prepare for the East-West Shrine All-Star Game and the NFL pre-draft process. Wright stayed in Florida until one week prior to his pro day scheduled for March 16. Wasielewski explained that Wright didn’t receive an invitation to the NFL Combine that ran from February 23 through March 2 in Indianapolis. Each year, the NFL invites up to 330 players to the Combine, and 230 to 240 of these players get drafted, while another 25 to 35 who, like Wright, aren’t invited to the Combine but still get drafted by NFL teams.

When COVID-19 hit in mid-March, Wright’s opportunity to showcase his talents at the Temple pro day for scouts was shut down. His pro day was rescheduled to a private facility in northern New Jersey, but that, too, was canceled as different states rolled out various health guidelines. So that left the KO turf, back where it all started, after a call from Wasielewski, who needed a field for Wright to hold his pro day workout.

On a blustery 45-degree day, April 1, Wright strode onto the Hoffman Field wearing his Temple and EMG Sports gear, ready for his virtual shot in front of NFL eyes. After the trainer took Wright’s height and weight, he performed a set of tests to judge his speed, nimbleness, and agility. Not satisfied with his initial numbers, Wright kept grinding to eke out another few inches on his jump or shave off another few seconds on his run. In all, Wright performed a three-cone test in 6.69 seconds (2020 WR NFL combine rank second), the 40-yard dash in 4.58 seconds, the short shuttle in 4.12 seconds (2020 WR NFL combine rank first), and broad jump of 9’ 9”.

After his results were submitted to NFL teams, Wright got the call from Washington that they wanted to sign him as a free agent. Wright considers this the opportunity of a lifetime, and he is objective about what talents he brings to Washington’s NFL franchise. “I have a good sense of emotional intelligence and know how to approach different scenarios and situations with other people,” he said. “I can work with others; I’m hard-working and genuine. What separates me from others is my makeup. Not a lot of guys have the same body type as me. Most of the time, when you have a bigger body guy, he can’t do the same things that skilled and skinnier guys are doing. That helps me, as well as the fact that I learned at a young age that the more you believe you can do, the more that you can do. I always put myself in a lot of positions to be able to do a lot of things because it creates a lot of opportunity. Those two things, my body make up and my hard work, how I go about things and my desire to be better every day.

“Honestly, I always had the dream to go to college. In my head, you couldn’t convince me that I wasn’t going to college. A lot of people have the mindset that we can’t do the things we actually can do. People allow themselves to stay stuck instead of trying to venture out and test themselves on what they can do. I didn’t want to be in that position. If I could, I wanted to bring back hope and faith. Instill the things in kids that I had instilled in me. That was really my goal.”

Due to the pandemic, now, instead of training with Washington in Virginia, Wright is keeping fit closer to home, working out in his room with weights on a bench, running hills, and eating a low-fat diet full of fish and salads. As for the fall season, that’s a big question mark due to the pandemic, but Wright takes it all in stride.

With that type of singular focus and drive, Wright is destined for success in the game and in his life.

UPDATE: A a game played on September 27 versus Cleveland, Wright had three grabs, six yard carry, solid special teams player and a hit on Cleveland defender to prevent an interception.
Back