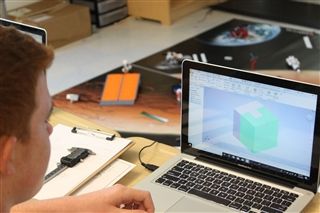 10/15/2020
Four years ago an anonymous donor gave a grant to the Hartford Foundation for Public Giving to fund underserved youth in grades 4 through 8 residing in Hartford and West Hartford an opportunity to attend Camp KO. Since then, Camp KO has been a place of learning and discovery for many talented area youths. This summer, Camp KO ran online academic and arts programs for three weeks in June and three weeks in July and extended 70 one-week scholarships to local students who met the financial need criteria. The funder had been so impressed with the success of the program that at the end of this summer the individual wanted to continue the relationship with KO and donated another $30,000 to provide scholarships to students to attend Camp KO The Remix After School program.
Director of Camp KO Sheri Slobin Shea works with academic partners in the summer including Breakthrough Magnet, Fox MD, Annie Fisher STEM, Covenant Prep, and Grace Academy. She also works with community organizations like the Legacy Foundation, Hartford Lions soccer in the North End, and Capital Squash near Trinity. In West Hartford, the primary partners are King Phillip, Bristow, and Sedgwick middle schools, and the program has expanded to include Smith and Charter Oak elementary school for fourth and fifth graders.
When Shea heard that she was awarded more funds to extend the online program, she jumped at the opportunity. While she was perusing her Facebook feed earlier in the fall, she noticed a photo from the principal of Breakthrough Magnet whom Shea partners with for Camp KO, next to a woman that Shea recognized. Serendipitously, that woman in the photo is the mother of KO grad Niko Rodriguez ’20, who also happens to be the superintendent of Hartford Schools.
“I thought, ‘That lady looks familiar. That’s Niko’s mom! That’s a connection.’ I emailed her and told her about this great opportunity. She got back to me immediately. Within two weeks, we met, she got her team involved, and they registered 30 kids for the five programs that we are offering,” Shea said.
The Hartford school administrators decided to extend the scholarships to the students of E.B. Kennelly and Dwight Bellizzi. Those schools were selected because they had the strongest administrators who knew the students the best and had been at the school the longest. Rodriguez tasked them to choose 15 kids at each school to join the online program. “They mapped it out really well,” Shea said. “They also wanted to ensure that each student had a friend in the class, too.”
Camp KO The Remix After School Program includes Art with Katherine Nicholson, Creative Writing and Improvisational Storytelling with Dawn Metcalf, Intro to Piano with Dave Zucker, Electronic Music with Dave Zucker, and Intro to Python Coding with Mike Ligon. The classes are held between four and 6 o’clock. “We wanted to have our best shot at reaching all kids. After school is a critical period of time for families, especially since there’s not a whole lot of sports going on right now,” Shea said.
“The greatest thing about working with Hartford public schools is having the superintendent on board. She guaranteed that all students would have a device and they got them wi-fi. If the wifi isn’t sufficient, Hartford Public Schools can give them a booster. Not only that, for the Intro to Piano class, they delivered three keyboards to students so those kids could do the course. And, they are delivering art supplies to kids that don’t have them,” Shea added.
The seven-week program began on October 13 and will run through December. Classes are held Tuesdays, Wednesdays, and Thursdays. Shea expects the program to run again in early January.
Back