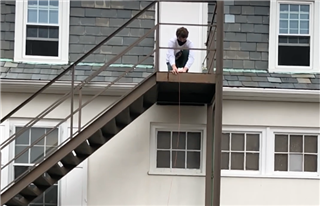 10/28/2020
AP Statistics is a math elective offered to Kingswood Oxford juniors and seniors. For many, the word statistics itself can immediately induce a cold sweat. However, stats teacher Tracy Deeter is not your average teacher. She takes an entirely different approach, structuring the class to encourage flexible thinking. How? “Often times, we have to take the approach of experiencing the material first and formalizing the content later,” Deeter explains.

This approach, she says, gives students consistent practice in contributing original ideas and constructing an understanding of new content in a collaborative environment and subsequently enables them to make better make connections between ideas. The result? Learning that will last long-term (and not send one running for the hills when the word stats is mentioned). Deeter’s hope is that students learn critical thinking and reasoning skills that will transfer to other life experiences.

Recently, the class was learning about linear regression, and Deeter decided to apply her “experience the material first” approach to help them visualize the concept - with a cameo appearance by a serious blast from the past. Students were faced with answering the following question: How many rubber bands should we attach to Barbie (remember her - does Barbie’s dream house ring a bell?) so that she could bungee jump from House 1 (so fun), but without hitting her head on the ground (not fun).

The catch? Students could only use seven rubber bands to figure this out. They first collected data on how far their Barbie would fall using 0-7 rubber bands. Next, they constructed an LSRL (least-squares regression line) and used that line to figure out how many rubber bands would be needed to have the most thrilling jump from the staircase in the back of House 1, which is approximately 179 inches off the ground. Before the jumps took place, students also investigated the following questions: How safe is Barbie? How good are the predictions for Barbie? How do outliers affect the LSRL? Is it wise to use extrapolation?

The classes experienced mixed results. Several ended up pushing the limit, and Barbie had an exhilarating but less than soft landing on the ground. Others played it safe. And finally, a few experienced extremely thrilling jumps. Overall, Ryan Ignatowicz '21 came away with the most thrilling jump of them all.

Now that’s a stats class taking things to an entirely new level (literally). This holiday season look for Bungee Jump Barbie Limited Edition, which will come with a full helmet and parachute.
Back