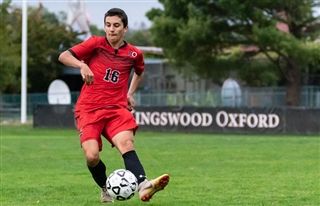 10/29/2020
After the solid win against Greenwich Country Day last weekend, the boys’ competitive soccer team traveled to St. Luke’s School in New Canaan this past Saturday, October 24, for their second friendly game. KO players got off to a hot start, coming close to scoring the first goal within the first minutes in the game. Captain Chris Sienko ‘20 ran behind the defense line, finding himself in a 1v1 against the goalie who came out fast, closing his line out for a goal.

After that, the majority of the game was dominated by the Wyverns, who scored their first goal at 18 in when Sienko was able to beat the opposition and lay off a beautiful pass to Aaron Rotter ‘21, who controlled the ball and placed it to the far corner of the goal. After taking a 1-0 lead, the Wyverns missed many scoring opportunities. At minute 24, St. Luke’s was awarded a penalty kick goal which they capitalized on, making it a tie 1-1 game.

The next goal didn’t occur until the second half when St. Luke’s was able to score off a placed cross from a free-kick. The Wyverns responded quickly as Brio Aslan’21 scored the game equalizing goal with an excellent PK six minutes before the end of the game.

The Wyverns worked very hard until the last minute to score the winning goal. They had some chances along the way but could not convert them. The game ended in a 2-2 tie.

All of the 25 KO players got chances to play in this friendly game. Captain Hunter Meshanic’20, Colin Ruiz ‘20 were solid defensively and offensively. Henry Pelletier ‘21, James Beerbower ‘21, Emil Rainer ‘22 also showed that they are ready to battle.
Back