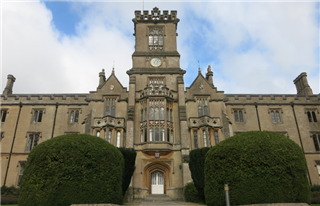 11/17/2020
When John Welsey founded Kingswood School in England in 1748, little could he have imagined that the staff of his school would be Zooming with its namesake school across the pond.  But, indeed, on Sunday, November 15, community members from both schools, Kingswood and Kingswood Oxford, discussed the history of their respective schools as well as educational upheavals and countermeasures in the time of COVID-19.
Zoe Parsons, the archivist at Kingswood School, offered a thorough overview of the history of the English school. Originally known as King's Wood located near Bristol, it was established initially for the children of local colliers. They were joined by the sons of the itinerant ministers of the Methodist Church. The school moved to its present location on the northern slopes of Bath in 1851. During World War II, the Kingswood buildings were requisitioned by the government and used by the Admiralty for military planning purposes, and the school was evacuated to Uppingham School and continued to function there. The school now educates 1,000 students from ages nine months to 18 years.
Brenda Semmelrock, KO’s archivist since 2012, shared a history of Kingswood which was started by local parents in the Hartford area who wanted a fine day school for their young men. They discovered a young teacher to serve as headmaster, George Nicholson, who attended Kingswood School in  England. Nicholson had a successful career at Kingswood and held the position of prefect and captain of the cricket team as well as a teacher. Nicholson requested from Kingswood if the new school in Connecticut could adopt the iconography and heraldry of his former school, and the Head of School granted him permission. Opened in 1916 with 15 students, the school’s tuition ranged from $200 to $450 per academic year, and lunch was $10 per month. The school abided by many British traditions. Nicholson divided the school into two houses, York and Lancaster for academic and athletic competitions, introduced field day, a debating society, end-of-the-year prize-giving ceremony, prefects, as well as offering afternoon tea. At the end of the first year, Nicholson wrote, “The discipline and spirit of the school are excellent. There’s a great pleasure to see the increasingly keen community among the boys and to know they are happy and more successful in their work.”
Fritz Farquhar ’59 P ’83, ’86, whose father, Nelson Farquhar was the fourth headmaster of Kingswood School, attended the fellowship reception and commented that he was eternally grateful to Zoe Parsons and Brenda Semmelrock for preserving the past. He asked how the archivists were chronicling the schools' responses to the COVID-19 situation in the archives. Semmelrock said that there is a big concern among all archivists about where to store all the materials, but she has hard copies of all the actions that KO has taken during this time. This file will enable future generations to learn how we pivoted under these unique circumstances.
Andrew Gordon-Brown, new to his role as headmaster at Kingswood School since September, said he was thrilled with the opportunity for the two schools to connect and strengthen their relationship. “All matter of possibilities come to mind, particularly since the death of distance due to online teaching.  The world that we have all had to get used to has made these possibilities more. I’d love nothing more than to host people from KO to Kingswood School. There are so many shared values that draw on the founder John Wesley in his often mentioned quote,  ‘An ounce of love is worth a pound of knowledge.’ I can see Kingswood Oxford has taken up that challenge. We both have people who do good in all that we can, give back to the community, and try our best to make a difference,” he said.
He commented that despite the challenges of teaching in COVID-19, the pandemic accelerated more educators to embrace technology. “What has been a blessing in many respects has been the quality of teaching and learning that’s going on. We had to toggle quite quickly with all of the kids in front of us to have all of the kids at home with the teacher delivering online instruction through Microsoft teams. What we found is that teachers had to be a whole lot more intentional in their lesson planning. ‘What was it they wanted to get across?’  ‘How will they evaluate and assess whether the kids were making progress?’ Schools all over the land have had to fast track the deployment of technology in teaching. I reckon we’ve taken our five-year digital strategy and condensed it into a year or 18 months,” Gordon-Brown said.
The two schools look forward to more opportunities to connect in the future.
Back