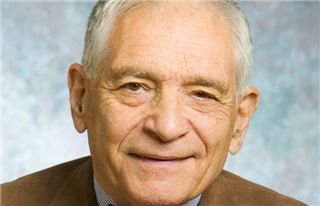 12/14/2020
On December 3, 2020, standing in the shadow of the cupola atop the Nicholson building on the KO campus, John Berman, a close friend of Jim Lyon ’48 and executor of his estate, handed Head of School Tom Dillow a check for one million dollars, a gift from Jim to the school that meant so much to him throughout his life. The location was a fitting one; Lyon served as the generous benefactor for the restoration of the cupola in 2017 when he saw it was in need of repair. That was consummate Lyon. When he saw a need, he was there with his magnanimous spirit ready to contribute in his characteristically low-key manner with a handwritten note.
“Jim loved life and one of the things about his life that he loved most was KO. This was one of the greatest institutions and friends closest to his heart, something that he loved to talk about. Jim felt strongly about KO and in advancing it in every way he could. His response was, 'How much do you need?' And then he would do his best to make it happen. It's a tremendous pleasure for me on behalf of Jim to see his wishes being fulfilled with KO," Berman said.
Head of School Tom Dillow expressed the enormous appreciation of the school not only for the monetary gift but for Lyon's unwavering presence and support. “In my three years at KO, the name 'Jim Lyon' came up frequently among a handful of other Wyvern icons, and always with a great sense of appreciation and respect for his affection for KO. I had the good fortune of getting to know him, and we talked about football and his fond memories of his teachers and classmates at Kingswood. That love and commitment he has to this school were so clear. It was amazing to see him, even in his final days, still showing up to board meetings active and engaged, despite the toll age and illness had taken on him. When we talk about commitment, about showing up, he lived that until his last days. With this gift, he has found a way to continue to support the school he loves even after he has left us. That is the ultimate example of generosity, and we are forever grateful to call him one of our own," Dillow said.
Lyon's attentiveness and involvement on the board despite his diminished health impressed KO board member Gil Keegan. "He listened. He was a participant. He asked questions. He was involved. He was engaged. For somebody who didn't have a lot of time left, he made sure that the school was in a good spot," Keegan said.
Judge Berman shared an anecdote from high school days of yore when the Hall High School boys would wade across Trout Brook to play baseball against Kingswood. Hall's most dynamic player was a powerful sprinter named Bob Cushman. During one game Cushman was rounding third base and headed for home: he plowed into Lyon, the second-string catcher, who was guarding home plate, and Jim dropped the ball. The play irked Jim his entire life and taught him a valuable lesson: you don’t stand there waiting for the guy to hit you, you have to go forward right at him. Berman said, "Jim was such a competitor, and he aggressively attacked his illness. That spirit personified who Jim was for his entire life.”
Jim’s extraordinary support of KO goes back decades and his gift ensures that his love for the school will go into perpetuity. As a former chair of the board of trustees who constantly looked for ways to enrich the lives of every student, Jim was a mentor to me,” said Board Chair Brad Hoffman.
This one million dollar gift is only part of the legacy Lyon leaves with KO. As a decades-long member of the Board of Trustees, he provided sage counsel to five heads of school. With his lifetime giving totaling well over two million dollars, Jim Lyon improved the experiences of thousands of KO students. His final bequest (which Berman estimated at close to $1.5 million), ensures he will continue to make an impact on generations of future Wyverns.
Back