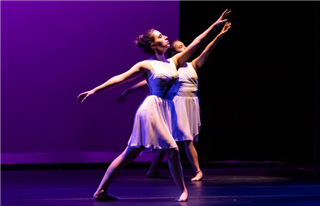 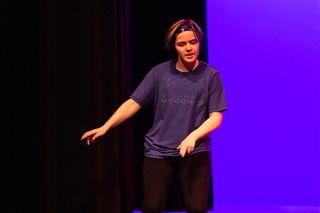 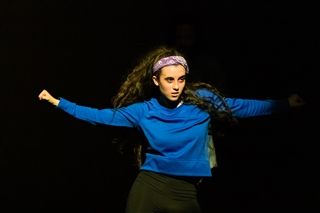 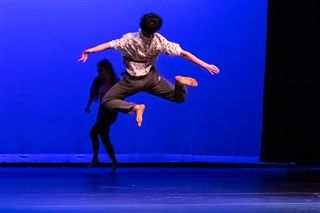 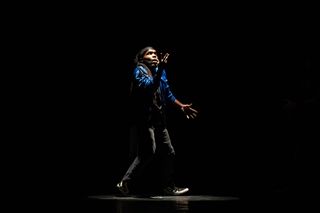 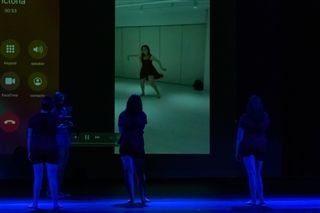 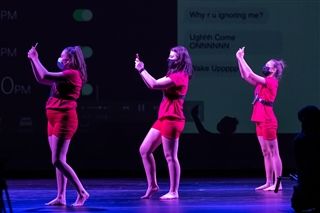 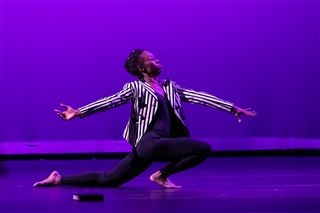 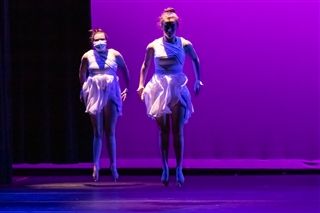 Choreographer Showcase: A Masterful, Joyful Expression of Self

12/15/2020
Fifteen KO Upper School students, from the novice to the more seasoned dancers, had the extraordinary opportunity to work with three local choreographers in the greater Hartford area and perform several virtuosic and socially-distanced dances in front of an empty Roberts Theater in keeping with COVID-19 protocols. Despite the lack of an audience to sustain the dancers’ energy, the students turned out exceptional and joyful performances ranging from classical ballet, hip-hop, contemporary, and lyrical.

Taking a cue from the school’s strategic vision to connect more deeply with the local community, Theater Director Kyle Reynold’s employed the talent of three area dancers who worked with each student, arranged dances, and performed solos themselves. JuS Hughes, a self-taught hip hop street dancer, has worked his way into becoming one of the most versatile choreographers, hard-hitting dancers, and energetic performers in the field today. Lauren Horn is a movement and text-based artist from Windsor whose work explores identity and the ways it can be uncovered, marginalized, highlighted, and erased. Savana Jones is a native of Hartford who performs an array of styles of dance including jazz, tap, hip-hop, modern, and social dancing.

The range of performances included a Reynolds’ choreographed piece entitled “Control” set to an instrumental version of Alanis Morissette’s “You Oughta Know.” A more balletic piece infused with modern dance moves, “Control” examined the students’ state of mind during the pandemic.  “I used the Alanis instrumental to talk to the kids how they felt under control this year by the limitations of the pandemic, our government, the election, sexual orientation or by anything they felt constricted by,” Reynolds said.  Reynolds described it as a “revolutionary clap back to that control” and a powerful means for each student to express how they felt in their solos.

Lauren Horn’s text-based choreography in “Social Experiments” explored the perils of social media as a destructive force. Students danced with their cell phones as a “partner” and a phone screen with text scrolling was projected onto the back of the stage. A highly sophisticated piece, the dance employed the use of student voices expressing their relationship with social media and the anxiety that it creates. The dance included an international student who was also projected onto the back screen of the stage as the students performed with her in real-time. This dedicated student took on the extreme time distance challenge and learned the choreography with her fellow students in the wee hours of the night.

Not all the dances were laden with social commentary. Some just showcased the sheer exuberance of moving. Savannah Jones’s work "El Debarge, Rhythm of the Night" allowed the kids to express the fun and joy of jazz dancing to 1980s music. JuS’s explosive hip-hop-infused work “Sanctuary” was perhaps the most difficult piece due to the extreme cardio workout for the dancers over a sustained period of time.

The school was very intentional regarding safety protocols in its lead-up to the showcase. Over the course of ten weeks, the students practiced in the dance studio which had taped out six-foot boxes where each student was required to remain while performing. If the students moved in a number, the entire group moved as well to maintain their distance. Practices were limited to one hour in keeping with CDC guidelines. Although practicing with masks proved challenging, the group was deemed a cohort so could perform the showcase maskless.

The students were thrilled with the opportunity to learn from the choreographers. Olivia Pear ’21 said, “It’s amazing to have this opportunity and have a back and forth with a professional and build a rapport with someone who is as deeply as invested in something that you love yourself.”

The lessons learned in the showcase transcended technical proficiency in any dance form. Frank Pu ’23 learned to relax while dancing to level up his performances. A relative newcomer to dance, Faith Potter ’23 said, “I’m so much more confident in my classes. I don’t care if I get an answer wrong. The emphasis is that you try. Choreographer Showcase really speaks to that element of KO that’s really all about the learning experience.”

Reynolds said,  "The Choreographer Showcase celebrates diversity by exploring different styles of dance and approaches it in an authentic way. I hope the community sees that the showcase is an artistic outlet for male, female, tall, short, gay, straight, abled, or disabled people. It's truly a place for everyone to attach themselves to an artistic outlet that is driven through the art of dance which is really important.