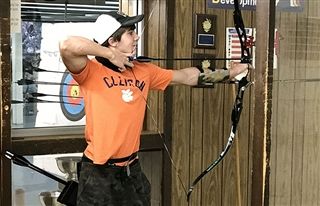 12/18/2020
This past Saturday, Daniel Raymond ‘22 was named as a member of the National Team to represent the Hall's Arrow Archery Club. He will compete later this month in the National Field Archery Federation (NFAA) indoor nationals.

Raymond was around seven years old when his grandparents gifted him a bow and arrow set for Christmas, thinking how the gift would inspire him. Raymond was intrigued with it, but at the time, had a tricky time firing the arrows - something that is complicated for an adult, never mind for a small child.

A few years passed and Raymond became interested in learning how to hunt. His grandparents once again came through and upgraded his bow to a more advanced model. While he didn’t start hunting right away (he is currently in the process of getting his license) it did spark a love of archery that he has been focused on ever since.

His parents recognized his passion for archery and supported his decision to get serious about it and start competing. Raymond discovered Hall's Arrow in Manchester, CT. “It looks like it would be a tiny little shop but it is actually the largest in New England," Raymond said. Shortly after, he started entering competitions. Raymond laughed as he recalled the first competition when he showed up with just his bow and arrow. After looking around at the myriad of other competitors' equipment, he quickly realized he would need some pretty advanced gear if he wanted to get serious about the sport.

Fast forward a few years, a host of competitions under his belt, and lots of practice both at Hall's and in his backyard using his own target, Raymond moved up the ranks. And just recently, he was named to the team that will represent Hall's on a national level!

Generally, a competition has 45 rounds and participants shoot three arrows per round. There are approximately 30 people shooting at once. Needless to say, he admitted it is not the most fast-paced sport to watch but definitely one of the more technical. His parents have been extremely supportive on the sidelines throughout the competitions.

Archery is no different than other sports in that it is not unusual for athletes to travel across the country based on their rank to compete, however, like so many things, COVID has changed this a great deal. Instead of traveling, participants record themselves shooting at their home range and then submit it to the NFFA to be scored. Raymond is excited about where the sport could take him next. In his junior year, he has been looking at colleges and happy to find out that most do offer archery as a club or a competitive team.
Back