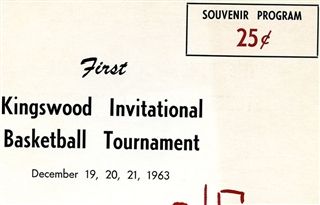 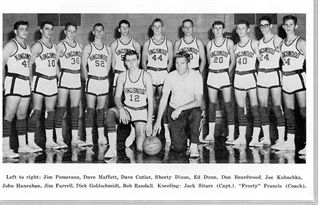 'Tis the Season For the K.I.T.s

12/31/2020
KO Archivist Brenda Semmelrock
The month of December is a very busy one on the KO campus with the anticipation of midyear exams, the wonderful celebration of the holiday season with the Candlelight Concert, an all-school holiday assembly, and of course, the excitement of an upcoming vacation. What most stands out in December is the Frosty Francis Kingswood Invitational Basketball Tournament, which was first held in December of 1963.

Athletic director and basketball coach, Frosty Francis, was looking for a way to supplement the schedules of prep schools’ athletic programs by providing an opportunity for increased competition. His idea came to fruition when a three-day competition amongst various prep schools was decided upon. Invitations were sent out to prep schools in the Northeast and the following schools were invited to participate in the first tournament, along with Kingswood-Montclair Academy (NJ), Hamden Hall (CT), Milford School (CT), St. Sebastians (MA), Laurel Crest Academy (CT), Hopkins Grammar School (CT), Moses Brown School (RI).

The Parent Association organized the promotion of the tournament, prepared tickets, made baked goods, coffee, and boiled hotdogs to sell. According to information in the book Kingswood, Fifty Years 1916-1966, the K.I.T.s, as they became known, were modeled after a similar event at St.Stephen’s School in Alexandria, Virginia, which was held during the vacation celebrating Washington’s Birthday. The first K.I.T. earned about $4,000 for Kingswood’s scholarship fund.

In 1979, for the first time in the tournament’s history, three women’s teams joined KO’s women’s team to be a part of the three-day event-Hopkins, Suffield, and Williston.

This basketball invitational has become a very exciting and wonderful tradition, offering not only the opportunity for teams to play some intense basketball, but to come together as a community to support our athletes and to visit with friends, families, faculty, staff, and alumni. It is very unfortunate that due to the current situation with Covid-19, we will have to wait until next year to find ourselves, once again, in the bleachers cheering the teams on for three days of exciting basketball games.

“Complete concentration on basketball. The contest is definitely an appeal to the players as well as to the coach. The time reduces the event to a close man to man battle of individual and team competitive spirit. Therein lies its appeal.” (Quote from Souvenir Program 1963). Oh, and by the way, Kingswood won the very first tournament title in 1963!
Back