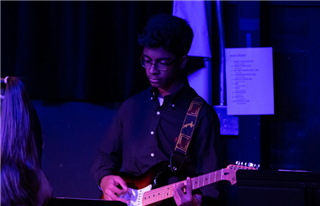 On a Positive Note: Music in Quarantine

1/12/2021
If there has been any upside to the quarantine that’s forced the world indoors, it’s been the opportunity to explore new interests (baking bread, anyone?) or to take a deeper dive into an existing passion. Ajay Ganesh ‘22, a classically trained guitarist and pianist since the age of five, penned “Departure”  a six-minute jazz-Indian fusion musical composition that is set to be recorded at Parkville Sounds Studio in Hartford.
When Ganesh was in middle school, he was introduced to the musical stylings of Frank Sinatra which opened up a new world of music. “I learned that you don’t just have to play just what’s on the page. You can improvise and compose. It’s what drew me to jazz,” he said. Since that epiphany, in his future lessons, he asked for new materials and less classical music. “I discovered that jazz is what I’ve been wanting to play,” he said.
Music is an everyday practice for Ganesh who acknowledges that his playing at times distracts from his homework but benefits his soul. “I can’t go a day without playing. I’m able to express myself in my own space. It’s like another form of meditation. My mood just shifts. It keeps me centered,” he said.
Ganesh began composing the piece early on the quarantine working in his weekly lessons with David Zucker ’88 whom Ganesh considers a ‘great musician.’ He was refining the piece by playing the chords and notes by ear, knowing the sound and vibe he was after. Admittedly, Ganesh realized that he was overthinking the piece, and it was not until October that the composition jelled when he wasn’t as consumed by the project. “These moments of inspiration strike at the most random times. I didn’t have a set melody but the notes just sort of happened. I don’t think that music or anything in life should be forced. As it’s gone on, I’ve polished it,” he said.
Zucker was so impressed with Ganesh’s tune that he called in his musician friends to listen to it who were equally enthralled with the piece. They agreed to record it together in the studio later this  January. “Departure” is the first track of Ganesh’s future album. He will work with Logic music software to record and work in post-production. Ganesh hopes that this project will jumpstart his musical exploration. “Music is the one thing that keeps me sane,” he said.
Back