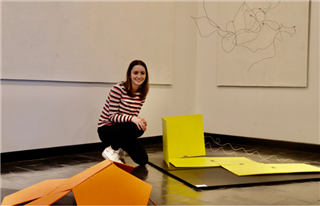 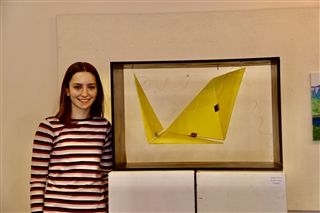 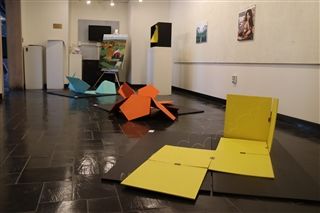 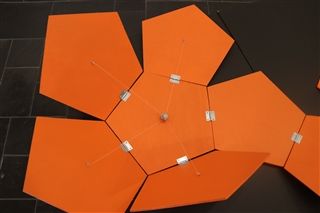 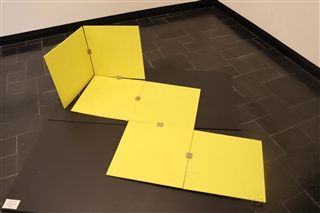 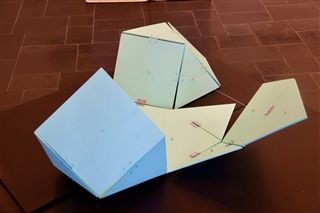 1/28/2021
Outside the Box is an art elective for students who want to venture beyond the traditional approaches of representation in art to discover new ways of interpreting and documenting the world they live in. Students are given a conceptual theme or a problem to solve, and they select or invent materials and draw upon multiple fields of study to communicate their ideas.

Why did you choose to take this particular art course?
I took this class because of the freedom that you have between the various media that you can use. That was really intriguing to me. When I took Foundations art class,  I found at times that wanted to take the project in a different direction, like 3D, because I do like to do sculptural pieces. Ms. Burnett let me do that, and she then recommended me to take this class.
Was art always an activity that you participated in?
No. It wasn’t until I came to KO. I didn’t take any art classes in middle school. I did robotics and journalism, but it was working with Ms. Burnett that I found to be really inspiring.
Explain these four pieces? Are they integrated together to form a singular piece or do they stand alone?
They all have their own personality but they do go together. The prompt that we were given was an environmental project. A lot of kids did different projects like a storm or tree or landscape, literal nature. Ms. Burnett asked how artists are inspired by their environment. I took that essentially in the most basic sense  - in time and space. What do I choose to do in the environment? The first thing that came to mind is that I spend a lot of my free time doing math problems. It’s something that’s really important to me. That jumped into my head. That’s what I do in my environment. Specifically, I found a personal connection within the theme of math. For me, I’m very into geometry and 3D geometry so it took me a month to come up with the idea and I sat on it for a while.
I love the way you brought the left and right sides of your brain to inform the pieces.
I wanted to bring math into my art because it’s something that I care about so much. I wanted to bring those two aspects of my life together and make art that I care about which is something that Ms. Burnett always tells us to do.
Let’s walk through each piece. Can you describe what’s happening?
“Roxie” is just a cube, and if you brought these pieces in together it would form a perfect cube. Based on the color (yellow) and the way the components are splayed out it gave me a vibe of the personality which is what I based their names on. After seeing them all complete, they have sort of a personality to them or a life-like quality. I thought it would be fitting to give them a human name to make them alive in a sense. I tried to capture the movement in the sculpture. I was thinking of a playful name. Roxie sounded like a spunky name.
“Marvin” is the net of a dodcahedron. This is the one that is the most sprawled out. It’s almost like a creature. This one is the first one I did, and it’s barely off the ground.
“Olympia” is a net of a cuboctahedron that uses triangles and squares in the shape. This one is the most definitely challenging. There was a lot of balancing, a lot of engineering throughout. I used gravity a lot in these. Simply by using the tension of the string and the force of gravity, it holds the piece together.
“Cornelius” is a little different. I didn’t give myself strict rules. In order to hold the shape that I wanted to, it became clear I would have to attached wires to some sort of exterior surface. The wires only attach within the shape of the other art pieces; the wires don’t attach to anything outside the shape. “Cornelius” breaks the rules. Putting it in a box gave me flexibility. I knew that I wanted this piece to stand up so I knew that I had to use wires to suspend it.
Explain the wire or cord that appears in the sculptures? What is the significance?
Yes, this has meaning. The way I thought about it, I thought the shapes have a natural desire or some sort of innate force that’s pulling them together. They want to fold up into the shape that they naturally are. The wires are representing the innate, natural force that’s tugging on them so they want to come together. There’s nothing necessarily that’s stopping them from coming together, but rather I pressed pause as they were coming together. What you’re seeing is the process of them folding together, but not completely finished.
What made you use the hinges to hold the panels together?
The hinges gave me a lot of freedom once I built it. I didn’t exactly know how they were going to look. I played around with it as I was building it. I started building the nets and they laid flat and I put them together with hinges because it allowed me a lot of movement. I was able to play around with how I wanted them to fold up which was fun. I didn’t know how they were going to turn out until I started to put them together. Tomorrow if I decided I wanted to change it, I could.
What led to your decision to use this bright palette?
I knew right off the bat that I wanted to use bright colors. I did think there was something playful about it so the bright colors made sense to me. I thought what would pair nicely with the various shapes.
Back