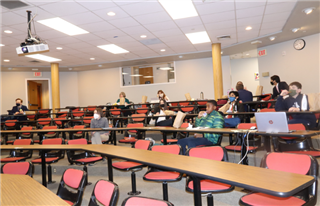 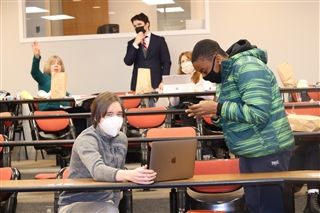 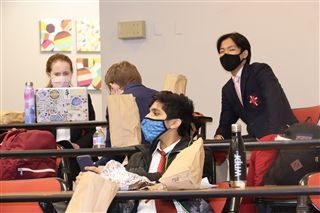 2/4/2021
Although the statewide Civics First Mock Trial competition ran a bit differently this year due to the pandemic, there was one thing strikingly consistent: Kingswood Oxford’s exceptional standing among the competition. (Last year, KO’s Mock Trial team was a co-winner in the state along with Weston High School). This year, KO’s team came in the top ten of the 44 teams that competed virtually on January 30. In the two rounds, KO tallied six points ahead of the competition (Wilton) in the defense team and an unheard nine points ahead of Westport in the prosecution team. The next competition will be held again virtually on February 26. Two winners will head to the finals. There will be no quarter-final round.

This year’s case involved the death of a teen girl by blunt force trauma after attending an after-party where underage drinking occurred. The defendant in the case is the entitled Wilbur Merritt IV, who confessed to killing the girl in a truth or dare initiation ceremony at the exclusive Cloak and Dagger secret society at his college. Faculty advisor Lynne Levine said that the students are more engaged in cases when they see the topics relevant to their lives, in this case, substance abuse. In the forward to the case, Civics First stated that they drafted this case to highlight the problem. “Our committee is all too aware of the very real dangers of substance abuse because nearly all of us are participants, as members of the bar and bench, in Connecticut's criminal justice system—and many are parents of teenagers as well. In addition to serving as a realistic homicide trial experience, it is our hope that this problem is illustrative of the tragic consequences—including the deaths of very young people that can result from substance abuse.”

The Mock Trial team practiced every Wednesday on Zoom and had three in-person practices prior to the event. Levine felt the practices were very beneficial to work out the Zoom technical glitches. Held in Tomasso Hall, the event was organized with the lawyers stationed in the front of the room, witnesses in the projection booth, and the “brains” who ran the computer, screen shared, and brought up the evidence (text messages, Uber receipts) in the left of the space. Admittedly, the setup wasn’t ideal because as Levine stated the students work as a team and need to see one another during the trial. Even some of the procedures were modified to accommodate for the Zoom virtual event. “We had two wonderful judges who were super patient. Normally, the kids are trained to stand up when addressing the judge. Standing was optional during the cross-examination. Usually, we’ll have three lawyers sitting at the table, working together and passing notes. We can’t do that because of covid. It just felt weird,” she said.

Despite the drawback, Levine commended the group for their professionalism. She shared that two students who performed particularly well were students who had taken on new roles in mock trial this year. Risha Ranjan ’21 who ordinarily takes on the role of witness performed admirably as a lawyer. Jaden Smith ’24, who had been a lawyer for the past two years, was now a witness. He earned two nines from the judges and did exceptionally well in a new role.