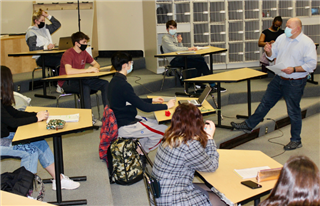 These words form the backbone of Kingswood Oxford’s Core Values, yet they don’t mean anything if they are not modeled by all members of our community. In the past year we have all been asked to make adjustments to keep our school open and for some this has meant taking on roles that haven’t been part of their workday before 2020. For some faculty and staff, this has meant extra duty during lunch to make sure surfaces are appropriately disinfected between groups; for others, it has meant monitoring popular gathering spaces to make sure protocols are being followed; and for Head of School Tom Dillow, it has meant getting back into the classroom.

When a KO teacher recently took a leave of absence for a few weeks, History Department Chair David Baker ‘04 asked Dillow if he would be willing to help. A longtime history teacher who had been eager to get back into the classroom, Dillow agreed, and the Form IV Modern World Studies class received a new substitute teacher. Adding the work necessary to prepare for and teach a class to the already full schedule of a Head of School has not been easy, but with everyone on campus taking on new roles and making adjustments, Dillow took the opportunity to live our Core Values along with the rest of our community.

Although Dillow actively taught at his previous school up until the time he joined KO, he hasn’t taught the subject matter he will be covering in Modern World Studies in over 10 years. Still, the material itself is among his favorites. “I was able to jump right into one of my favorite subjects - the French Revolution,” said Dillow. The class learned how Edmund Burke’s “Reflections on the Revolution in France,” became a cornerstone of modern political conservativism and that the terms “left” and “right”, often used to describe one’s political persuasion, came from the National Assembly during the Revolution where supporters of the monarchy sat on the right side of the assembly and supporters of the revolution sat on the left side.

According to Dillow, the best part of teaching this class is getting to know the students in a way that is not always possible as an administrator. At first, the students were nervous about having the head of school teach their class. “I was nervous because I felt that I had to be on my best behavior [and] I had to make a good impression. Now after having him for a few weeks, you realize that you can just be yourself with him and that's helped me,” said Max Sams ‘23. They were not sure what to expect of him or what he would expect of them, but in the few weeks, since he’s taken over, they have all become used to the idea and each other. “Mr. Dillow did a great job with making the transition as smooth as possible. We were starting a new unit when he started and he took that as an advantage He incorporated some of [our teacher’s] techniques and added some of his.”

The biggest challenge has been finding effective teaching methods while maintaining campus COVID protocols. “With all we know about how students learn best, and how we want to teach them, COVID has put everything back 20 years,” said Dillow. To keep everyone safe, students must stay stationary, face forward in rows of desks while a teacher talks to them from the front of the room. Yet, research and best practices say that the most impactful learning comes when students are encouraged to collaborate with each other and engage in Harkness-style discussions. Maintaining this balance between keeping students engaged and keeping them safe is one that KO faculty have been addressing since September, and having the chance to teach this class has given Dillow an even greater appreciation for what his teachers have been up against this year. “Wearing masks, keeping six feet apart, standing still, managing kids on Zoom...it’s all very stressful. I have a new appreciation for how hard our teachers have been working and the challenges they face to teach the material in an engaging way. We are all fortunate to have such an incredibly resilient and student-centered group of teachers at KO,” Dillow said. The dedication our faculty has shown to continue to find creative ways to engage our students while following all of the health protocols has inspired our community, especially Dillow.

Like all substitute teaching assignments, this one will likely soon end for Dillow (he is scheduled to teach the class until Spring Break in March), so will he hang up his teaching hat again? Not likely. Dillow plans to teach a Form VI elective course next year on Tribalism. He created and taught this interdisciplinary course at his previous school which looks at the sociology and neuroscience behind why we create “in and out” groups and how they influence our behavior. He plans to use this as a lens of history and sociology to examine how our tribal impulse creates both community and conflict at the same time.

Dillow had been wanting to get back into the classroom, and this experience has only reinforced his decision to teach next year. “It’s the best part of my day,” he says happily. “You can quote me on that!”
Back